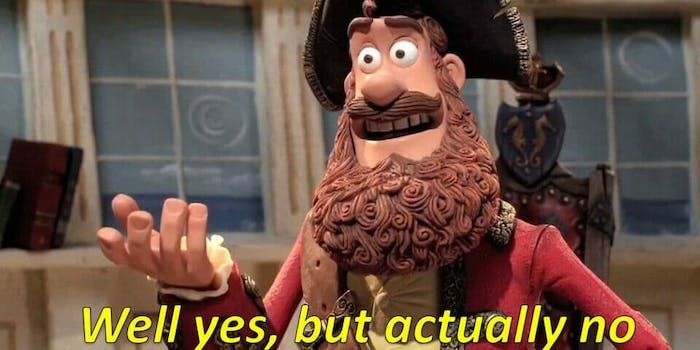 The ‘Well yes, but actually no’ meme is here to help you explain things

Well yes, this is a good meme.

There are questions out there that are hard to answer precisely. Is marijuana legal? Is the United States a democracy? Does George R.R. Martin plan to ever finish A Song of Ice and Fire? Luckily, there’s a new meme to help you in those frustrating times. It’s called “Well yes, but actually no,” and it’s spreading like wildfire across Reddit. As an added bonus, it even has a pirate.

Hope this hasn’t been done before from dankmemes

The meme comes from the 2012 stop motion short film So You Want to Be a Pirate. During the 18-minute film, the character Pirate Captain (voiced by Hugh Grant) asks the audience, “Of course a lot of people would put my success down to my luxurious beard. But do you know what I put my beard’s success down to?”

He’s answered off stage by the Pirate King, who guesses “Shouting?!”

“Good guess, but actually no,” answers the Pirate Captain.

This bit of dialog can easily be misheard as “Well yes, but actually no.”

And if ever a phase has been ready-made for a meme, “Well yes, but actually no” is it.

On Feb. 13, Reddit user GarryBoldwater used a screengrab from the film with the misheard quote to create a meme that he posted to the /r/HistoryMemes subreddit. He included a caption referencing Germany’s 1939 invasion of Czechoslovakia, one of the major events leading to World War Two.

The post got a fair amount of attention, prompting the original poster to make more memes. Soon other people took up the mantle. Eventually, it made its way to the larger /r/dankmemes and /r/MemeEconomy subreddits.

Nuremberg Laws were a big oof from HistoryMemes

You Simply Must Meet Thomas from dankmemes

Reality can be whatever I want it to be from dankmemes

The New Format Sweeping the Nation from MemeEconomy

As of now, it has yet to make much of a splash on Facebook or Twitter, but with a meme this adaptable it’s probably only a matter of time. It won’t be long before everyone is using it to make every philosophical and political point imaginable. Is that a good thing? Well yes, but…