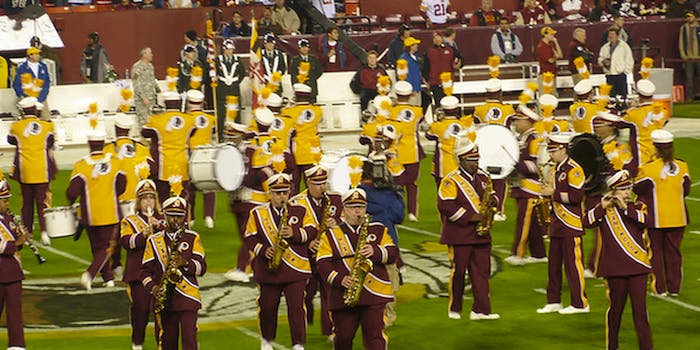 The team lost its U.S. patent on the name two months ago but it's still clings to its history.

Washington D.C.’s football team continued its campaign to keep the term Redskins as its official team name and mascot Wednesday, unveiling a YouTube video featuring a series of interviews with 11 Native Americans who could not care less about the name.

The video, titled “Redskins is a Powerful Name,” shows the aforementioned 11 discussing topics like the inherent pride in the word, history of Native American slang, and problems facing the greater Native American population over the course of nearly two minutes. Video producers found two descendants of the Native American who designed the logo in the early 1970s, as well as members of the Navajo, Blackfeet, Chippewa Cree, and Crow nations, in addition to a few others.

Of course, what it’s forgetting is that there are more than 2.9 million people registered as part of the American Indian and Alaska Native population.

The video is the next in a long line of efforts on behalf of the Washington Redskins to sell the American public on the name, which over the past few years has drawn increasing scorn and disapproval. Many articles have been written demanding a name change. Last week, the University of Minnesota opened an effort to ban the name from its stadium. The Redskins play the Minnesota Vikings in the state’s central university’s stadium Nov. 2.

The team lost its U.S. patent on the name two months ago but still clings to its history—along with 11 of its citizens.