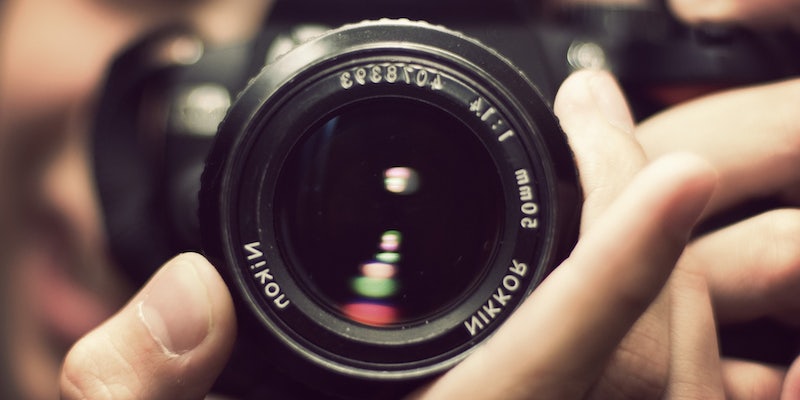 He should be rewarded for an important public service.

When Feidin Santana recorded the murder of Walter Scott by a North Charleston, S.C., policeman, he reasonably feared for his life. Santana’s fear extended past the heat of the moment and the sight of Officer Michael Slager shooting Scott in the back eight times. As he told MSNBC’s Chris Hayes, “I thought about erasing the video and just getting out of the community…and living some place else.”

So it makes sense Santana’s lawyer, Todd Rutherford, is now seeking residuals for news outlets’ use of the footage. Rutherford is accusing CNN and BuzzFeed of abusing the footage for revenue and ordering them to pay fees of $10,000 each for rights to Santana’s recording.

Although copyrighted materials are considered fair use when newsworthy, experts the New York Times talked to said the relevance of the footage has passed, and therefore, so does the media’s implied permission to use it. (The New York Times did not receive a letter because they have permission of Santana and Scott’s family to host the footage.) As is true with most newsworthy moments, the footage of Scott’s death is also available on YouTube and Liveleak.

What seems at first to be a didactic argument over copyright law actually raises an important question for Santana and other citizen journalists like him. Because of the risks that can be associated with recording the police, shouldn’t society reward these brave individuals for bringing to light corrupt and heinous practices within our nation’s police force?

Shouldn’t society reward these brave individuals for bringing to light corrupt and heinous practices within our nation’s police force?

While charging media outlets for use of the footage might not be the way to do it, it makes sense for these individuals to seek a reward for their contribution and for society to incentivize their courage. The charges from Santana’s lawyers may be misdirected, but they highlight the need to prevent civilians from being discouraged to practice their rights.

In the footage, Santana is never approached by Slager or other officers at the scene, although he moves within feet of Scott’s body with a smartphone plainly pointed at them. Still, recording the police can be a risky maneuver, no matter what the police are doing, and the consequences can be range from confiscation of the recording device to being arrested in vengeance for reporting the wrongdoing.

Although the right to record police-citizen interactions is protected under the First Amendment, it’s a decision that can be dangerous and reaps precious few rewards. Staten Island resident Ramsay Orta claims he’s been targeted by police since recording footage of Eric Garner’s death at the hands of an NYPD officer last summer. Although Orta was later arrested on gun and drug charges, he was forced to languish in Rikers Island even after he posted bail.

Elsewhere, a 26-year-old Orlando man was arrested and charged for recording police as they arrested another man crying for help. Journalists from a number of news agencies had their recording equipment confiscated by Ferguson, Mo., police during that department’s militaristic response to protests over the death of Michael Brown. When a Massachusetts woman secretly kept her phone camera rolling while she was arrested, police there charged her with unlawful wiretapping.

These are intimidation tactics by police departments to discourage people from recording them. Regardless of whether a police officer is doing anything wrong, you always have the right to record police while they act in the interest of official police business. Although a First District court case allowed for “reasonable” restrictions on recordings of police (meaning as long as it does not endanger officers or interfere with police activities), police officers are public service workers with little expectation to privacy, meaning anyone is free to record them.

These are intimidation tactics by police departments to discourage people from recording them.

The American Civil Liberties Union offers a field guide on recording police, and it highlights the inherent risks citizens take on when they decide to do so. If an officer tells you to stand back because you’re interfering with their activity, for example, your best option is to follow orders: “In general, a court will trust an officer’s judgment about what is ‘interfering’ more than yours.”

Although the Supreme Court decided last year warrantless search and seizure of a cell phone is unconstitutional, the ACLU recommends citizen journalists hand over their device while politely stating their dissent to the seizure.

In general, your best option for dealing with the police is to do as they tell you. Even when an officer unlawfully takes your property or otherwise restricts your right, it is in your best interest to let them do it and ask questions later; this is because judges and juries are far more likely to believe in the officer than you—and that’s if the officer doesn’t retaliate at the scene, much like Slager did to Scott’s on-foot and unarmed escape attempt.

The decision to record police actions puts you in not just the legal crosshairs of that police department but also the literal crosshairs of the officer in question. What Feidin Santana did by recording Officer Slager was supremely brave: He watched an officer shoot an unarmed man for very little reason then decided to record the murder, possibly inciting further violence. Such man-on-the-street whistleblowing should be financially rewarded in the hope that more people will express similar nerve in the general populace.

Rutherford’s method of obtaining that reward for Santana, however, is misjudged at best. Restricting publication of the footage makes it more likely Slager’s actions will disappear from of the national consciousness, an aspect to this story that could be crucial in seeking justice for Scott. Police departments are notorious for handing down skimpy punishments to their officers, but a large public eye on Slager’s trial will ensure a dutiful sentencing. By making it harder to publicize the story, Santana’s lawyer is pushing back on the media’s right and need to cover the story.

Restricting publication of the footage makes it more likely Slager’s actions will disappear from of the national consciousness.

How we as a society could reward people like Santana is actually fairly simple and has precedent. Authorities pay for information related to crimes all the time—why should crimes committed by police be any different?

In fact, the National Crime Prevention Council sees rewards as a helpful tool for police in investigating a crime, stating that “the fear of reporting is overcome with anonymity, and apathy is overcome with rewards.” Crime Stoppers USA, a nonprofit devoted to preventing crimes and recovering evidence, has dolled out over $100 million in rewards since its founding in 1975 and helped to make over 600,000 arrests.

Offering such rewards for police wrongdoing could help encourage people to keep the camera on during police interactions—something shown to improve police-civilian relations across the board—as well as prevent lawyers like Rutherford from restricting the press in an attempt to earn their clients’ the money they deserve.

When in a situation like Santana’s, it takes an immensely clear head to stay as calm as he did, preventing the blatant lies of Officer Slager from becoming the official story. He offered a public service that should not simply be rewarded but encouraged among all of us.

Photo via etharooni/Flickr (CC BY ND 2.0)