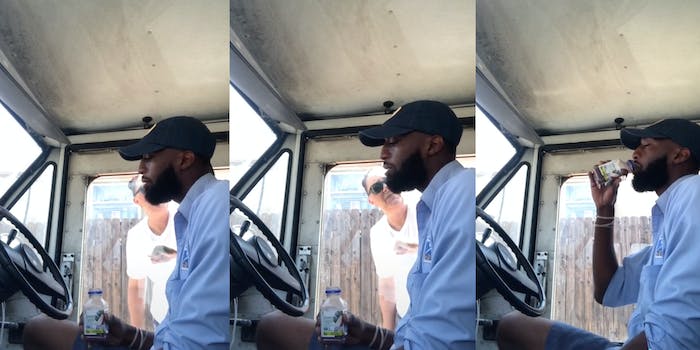 'I aspire to be this chill.'

These days, it seems a fresh Karen is around every corner. More often than not, the viral videos featuring Karen sightings will end in frustration, but such is not the case with TikToker @Devdatdude15’s recent upload.

@Devdatdude15, who goes by “bowtiedev” on his TikTok page, uploaded the thoroughly satisfying Karen video on May 29. It shows Dev, who works as a driver for the U.S. Postal Service, sitting casually in his vehicle. A caption for the video sets the scene: “When she wants her mail but it’s your lunch break.”

Past Dev, out the driver’s side window, a blonde woman enters the scene. She has all the classic qualifications for “Karen” status, complete with sunglasses and a permanently irate look. She knocks several times, before throwing her hands up in exasperation and walking away. Dev’s gaze never wavers in her direction, he simply continues to enjoy his beverage and mouth along to his music.

A second upload from Dev nixes the music playing over the interaction, allowing Karen’s words to be heard. As she approaches, Karen can be heard shouting “hello” through the window, despite the fact that Dev is clearly not working at the moment. After several “hellos” go unanswered, the woman asks: “Can I get my mail? You’ve been sitting here for 30 minutes.”

When Dev continues to ignore her very existence, Karen slams her fist against the window several more times before muttering a classic Karen phrase as she walks away: “I’m calling your supervisor.”

People were utterly delighted by the interaction and heaped praise on Dev for refusing to work during his break. Anyone and everyone deserves a lunch break of at least 30 minutes, so very few people felt a modicum of sympathy for Karen’s short wait. In fact, many people encouraged Dev to make her wait longer.

“I would sit an extra minute and then drive away/deliver later if I could,” one commenter wrote. “You deserve every minute of that break. Get far from that person. Stay safe!”

Other people recommended a sign or curtain to keep Karens away during his lunch breaks, but most simply delighted in dragging Karen and her burning need to have her mail Right. This. Second.

Many people pointed out that they couldn’t “ever think of a time where I NEEDED my mail that much.”

Dev’s unerring charm also served as inspiration for a number of people, both on TikTok and Reddit, where the video eventually spread. People shared their desire to “be this unbothered” in their daily existence.

“I aspire to be this chill,” Reddit user TanisSnow wrote.

Unlike most Karen videos, this one actually has a happy ending. A day after their viral confrontation, Karen and Dev made up. He uploaded a video to his TikTok showing the two embracing outside of a white picket fence. A caption for the video notes that “a day later she respected his lunch and got her mail.”

If only all Karen confrontations had such happy endings.