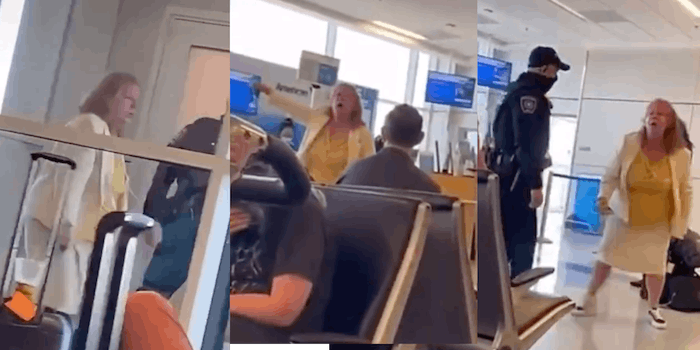 ‘I want the manager of the airport!’

A TikTok video featuring a woman’s tantrum at the airport has gone viral—mainly for a passenger’s two-word response to her meltdown.

In the video, the woman screams at airport security as well as other passengers and demands to speak with the “airport manager.” She also claims she was choked after she allegedly breached airport security.

The video was shared by TikToker Kevin Durio Jr. on Wednesday and has been viewed over 3 million times since.

The woman, apparently named “Terry,” identifies herself by her full name in the video, though her last name is not clearly audible.

At the start of the video, she is seen screaming at a security worker.

“He threw me to the ground,” she screams, pointing to another security worker. She then walks to where other passengers are seated.

“I want the manager of the fucking airport here,” she screams as she walks.

After she enters the seating area, she seemingly seeks validation from passengers, repeatedly screaming, “Who saw him choke me to the ground?”

The person behind the camera says, “I saw you run through the door when you weren’t supposed to.”

“He chokeholded me to the ground,” she screams, pointing in the direction of the security guard.

Someone else from the crowd says, “You deserved it, bitch!”

“Boo hoo? You fuck off!” she screams at him, waving her hands around and trying to walk around the security worker who is trying to mitigate the situation.

“You’re not helping,” the worker says.

Terry walks toward a glass window, screaming, “I want the manager of the airport here.”

The video also went viral on Twitter, where it was reposted, prompting “boo hoo” to become a trending topic on Thursday.

People thought it was hilarious, that in true Karen fashion, she asked to speak with the “manager of the airport.”

But it was Durio Jr.’s boo hoo that stole the show.

“When all you want is your tantrum validated but receive a Boo Hoo from the audience..” one joked.

Update 1:22pm May 28: This article has been updated to reflect that Kevin Durio Jr. told the Daily Dot he did not film the TikTok video.