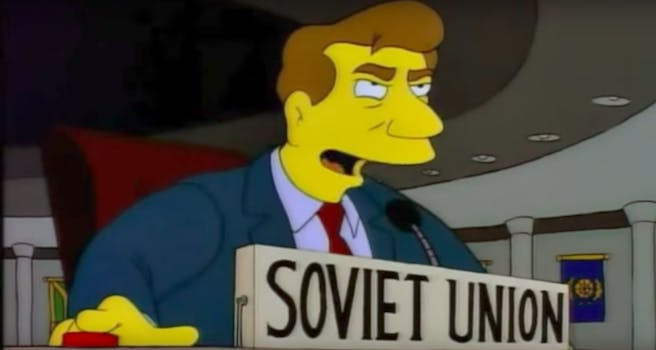 Ukraine trolls Russia on Twitter with a superb ‘Simpsons’ GIF

It includes Lenin rising from the grave.

In the classic Simpsons episode, “Simpson Tide,” the world is put on the brink of all-out war because an erratic, irrational, incompetent, and unpredictable man, spurred on by a fragile grasp on his own masculinity, takes charge of America’s nuclear arsenal, while the Russian government reveals itself to be a resurgent menace to the United States.

Damn, that was spot on.

Only now, in real life, instead of Homer upset about Bart getting his ear pierced and commandeering a U.S. submarine, we have President Donald Trump.

Honestly, it ain’t all that different. Which is what makes the Ukrainian government’s use of a Simpsons GIF to troll Russia’s Twitter account so sublimely good.

(Also, yes, here is the requisite: “What even is that sentence?” I just wrote.)

The argument stems from a gentle poke the nation made on the microblogging site about Russia’s relationship with the French.

The dig was in response to President Vladimir Putin referencing Anne de Kiev in his meeting with French President Emmanuel Macron, which the Ukraine took issue with.

Russia, which seized control of the Ukranian territory of Crimea, tried the “Let’s let bygones be bygones” route.

We are proud of our common history. 🇷🇺, 🇺🇦 & 🇧🇾 share the same historical heritage which should unite our nations, not divide us. pic.twitter.com/hdmkuGy22p

Ukraine brought the house in its response.

(As it should, because it was only just very recently invaded by Russia.)

You really don't change, do you? pic.twitter.com/HDfS9A8jWZ

That GIF comes from a scene at the United Nations where the Russian ambassador refers to his country as the Soviet Union. A perplexed American bureaucrat says he thought they dissolved.

That’s what Russia wanted you to think.

Life, as per usual, imitates The Simpsons.