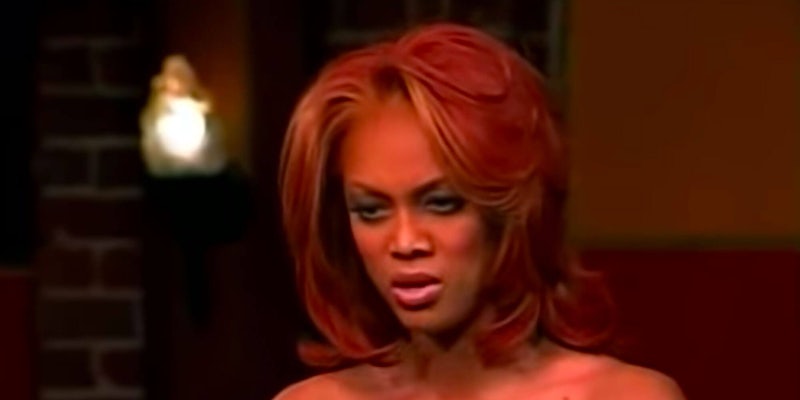 'Growing up is realizing that Tyra Banks was the villain and not Naomi.'

Tyra Banks is trending on Twitter as fans remember the controversial moments of America’s Next Top Model, her hit show that ran for 24 seasons.

Many are now calling on her to apologize to some of the former contestants.

She criticizes Evans for not getting the gap in her teeth closed at the dentist. “Do you really think you can have a Cover Girl contract with a gap in your mouth?” she questions.

“Why was this allowed to air,” the user captioned the video. “wtf Tyra banks is going to straight hell.”

Many noted how Banks actually widened a white model’s gap seasons later to highlight her uniqueness.

Another Twitter user reminded people that if everyone was going to “crucify Tyra,” they should remember the standoff between Banks and Yaya DaCosta. In the episode in question, the contestants had to pick a hat to wear and explain why they chose it.

DaCosta, a Black model, chose to wear a cowboy hat. Judge Nigel Barker said that everyone figured she would have “gone for the African hat.” She calmly responded as to why she didn’t, and Banks accused her of being defensive.

There were also multiple instances of alleged sexual assault on the show. During a photoshoot in Africa, cycle 4 contestant Keenyah Hill stopped the shoot because she felt uncomfortable with a male model, who kept touching her. Then, at the judging panel, Banks called her out for it.

Another user pointed to when judge Mr. Jay Manuel told a sexual assault survivor to “suck it up” after she explained she didn’t feel comfortable kissing a man.

One contestant got hypothermia from a photoshoot in a freezing cold pool, according to BuzzFeed, while another was made to do a photoshoot in a graveyard the day after her friend died. Banks even eliminated contestant Angelea after it was revealed she was an escort before appearing on the All-Stars season.

Banks has been long criticized for turning models into different races for photoshoots. And while she’s apologized on more than one occasion for the controversial photoshoots, Banks hasn’t apologized for the treatment of the contestants on the show.