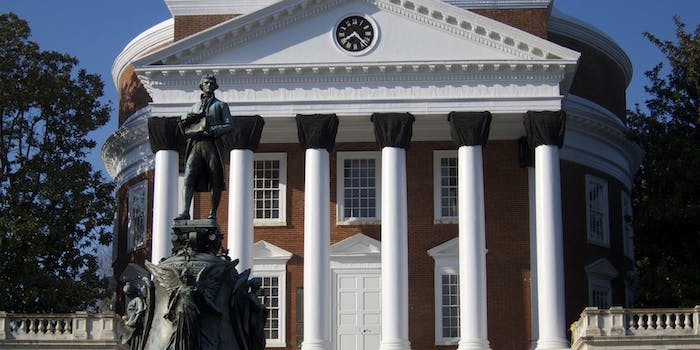 @RectorDrago took to Twitter to protest a decision by the University of Virginia's governing board, but its voice has since been silenced.

University of Virginia President Teresa Sullivan was forced to resign last week by the college’s governing board, to the outrage of many students. One alumnus took to Twitter to mock the decision.

@RectorDrago is a parody of Helen Dragas, the head of UVA’s Board of Visitors, who announced Sullivan’s resignation. Started by a middle-aged alumnus living in Virginia last Tuesday, he felt that the account was a good outlet for people frustrated with the decision.

“False sense of emergency and a rushed, secretive vote. For my next trick, I’m going to get UVa to invade Iraq,” the account posted June 14.

“If the BOV is going to make secret decisions, they’re going to get secret sarcasm,” the parodist tweeted, according to The Daily Progress.

According to Twitter’s Impersonation Policy: “Twitter accepts and processes impersonation reports from the person impersonated or someone legally authorized to act on his or her behalf.”

That leaves many to believe that Helen Dragas had the account suspended herself.

“Satire is the weapon of the powerless,” the account holder wrote in a Direct Message interview with The Cavalier Daily.