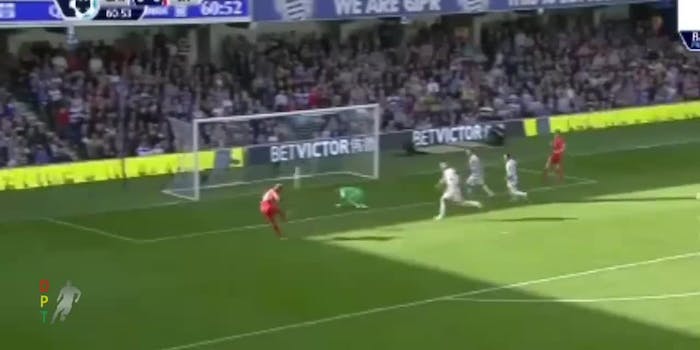 Soccer Twitter was not happy after Mario Balotelli missed this goal

We'd hate to be Mario Balotelli walking the streets of England after this.

That’s exactly what happened to Italian footballer Mario Balotelli after the star Liverpool player missed his shot by a mile—or perhaps it’s better to say a kilometer.

Liverpool fans on Twitter have not been the most civil in expressing their grief.

Yeah, but would a postman miss an open letterbox and blaze it over the door frame @FinallyMario? pic.twitter.com/Zdfd88ySs9

I don’t care how much he gets paid or how successful blah blah blah. @FinallyMario will always be the European back house reject #LFC

Amazingly, that wasn’t the most embarrassing part of the match. That would be the own goal where QPR defenders Richard Dunne and Steven Caulker diverted a ball straight into their net.

So yes, Liverpool still ended up winning 3-2, but again, when European football fans get angry, it’s like nothing else seen in professional sports fandom. Granted, Liverpool did spend £16 million pounds to sign the guy, so it’s easy to see why some fans are upset with his performance.