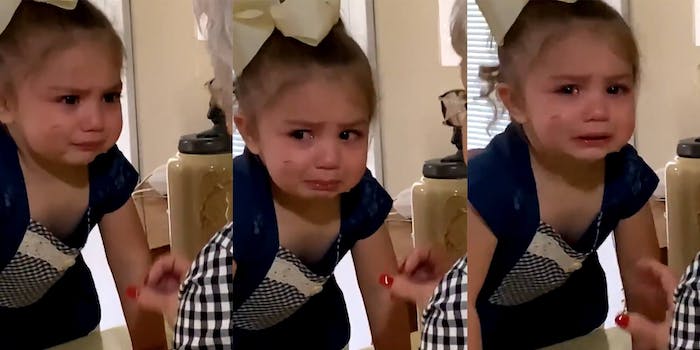 'Me finally accepting the fact that I'll probably be single the rest of my life.'

A video of a little girl crying has turned into a Twitter meme where people share difficult lessons they’ve learned–and it’s hilarious.

It started when Twitter user @sadiealeewhite shared a video of a woman explaining to a toddler that people should eat a meal before enjoying ice cream. It’s a difficult pill to swallow. Through tears, the young girl nods in understanding.

“Me finally accepting the fact that I’ll probably be single the rest of my life,” user @sadiealeewhite wrote alongside the video.

me finally accepting the fact that i’ll probably be single the rest of my life pic.twitter.com/Kt7sueUy3r

The video started a trend on Twitter. People are now sharing difficult lessons they’ve learned along with the adorable video. Most of the participating tweets are about tough lessons learned through heartbreak.

“Me finally accepting the fact that nobody got the same heart I do,” Twitter user @chrisbby wrote.

My friends telling me I deserve better after I get my heartbroken for the 57th time https://t.co/ScinYFg2fD

convincing myself that him liking other girls pictures isn’t cheating https://t.co/37pWp0hvk1

There are also a number of tweets about hard lessons learned in relationships, like the whole personal space thing.

This is honestly me when my boyfriend is trying to explain why he isn’t mad but his tone says otherwise https://t.co/Yb06tf5LKP

Trying to explain to my girl that I eventually have to go home and can’t be with her 24/7 https://t.co/QBYvUOLR1m

But of course, the relatable video has something for everyone, even for One Direction lovers.

“Me finally accepting that One Direction are done, and they are never coming back,” Twitter user @1DAFSanta wrote.

me finally accepting that one direction are done and they are never coming back https://t.co/2PdDE9EZ6a