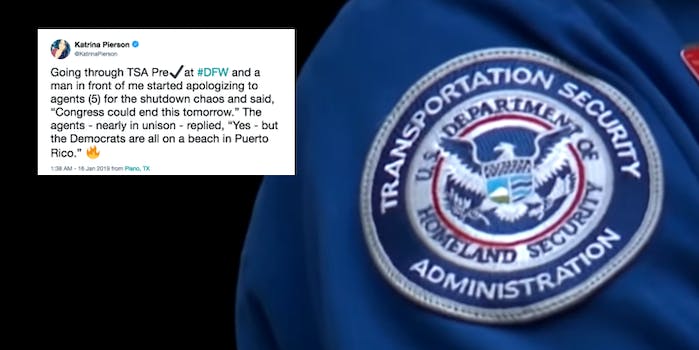 Users are trolling opportunistic partisan players with the TSA agent meme that mocks how unpaid federal employees are being used as cheap propaganda.

Twitter users are tired of federal employees being used as cheap propaganda—while they are ordered to work unpaid through the ongoing government shutdown—and are turning partisan agitprop into a fresh meme to troll lawmakers.

In recent days, prominent lawmakers and individuals on the left and right have been recounting shutdown stories from federal workers they meet in order to sway public opinion or opportunistically smear the opposition. The stories are often inauthentic, too good to be true, insultingly theatrical and emotive parables that fit the narrative of whoever is telling them—which seems to be why so many people are annoyed by them.

On Tuesday, for example, Rep. Rashida Tlaib (D-Mich.) described looking “into the eyes” of a broke but woke TSA agent who told her “don’t stop fighting.”

So hard going through the airport today. I looked into the eyes of our workers who deserve better. A TSA officer said: "Don't stop fighting. Keep it up." I broke down & felt the weight of the responsibility on me. I will never become numb to the human impact. We must end this.

Flying to Washington yesterday I met a TSA agent working without pay because of shutdown. She is a single mother raising a 15 year-old daughter, & her family is struggling to make ends meet without her paycheck. #ShutdownStories

According to her tweet, while making her way through Dallas/Fort Worth International Airport security, Pierson happened upon an angelic choir of TSA agents defending the president’s uncompromising stance by blaming the Democrats “in unison.”

What was going on became particularly clear to one user.

It was Pierson’s story, however, that sparked the TSA agent meme as Twitter users on both sides of the political aisle took the story format and rewrote in ridiculous ways.

I was at the airport this morning and a TSA agent stopped me and said "Don't listen to the trolls on Twitter…keep those hot food takes coming…you're always right!" I broke down and she hugged me…then we had a burger with no tomato followed by some milk chocolate.

On the way back, another TSA agent stopped me.

As she motioned me forward we locked eyes.

She leaned in, and sighed:

“The MCU is trash. Spider-Man isn’t even dead."

Going through TSA and I stopped to ask three agents if they were getting paid. They all broke down in tears and began telling me how terrible Trump was. "ORANGE MAN BAD," they said in unison. I gave them a hug and told them it would be okay lol jk none of this happened you idiots

a TSA agent just stopped me and said “I want to say: your fun facts about Gore Vidal are interesting and you should keep sharing them with whoever will listen” and then she clasped my hand and wept but we weren’t even near an airport I’m honestly not even sure she was a tsa agent

I was just in a hipster coffee shop where a group of TSA agents who moonlight as Benedectine monks broke out in a Gregorian chant calling on Pelosi to approve 4 trillion dollars for the solid platinum border wall.

Around 51,000 TSA employees across the country didn’t get paid on Friday, their first lapsed paycheck of the shutdown, a demoralizing new phase in what is now the longest ever government shutdown.