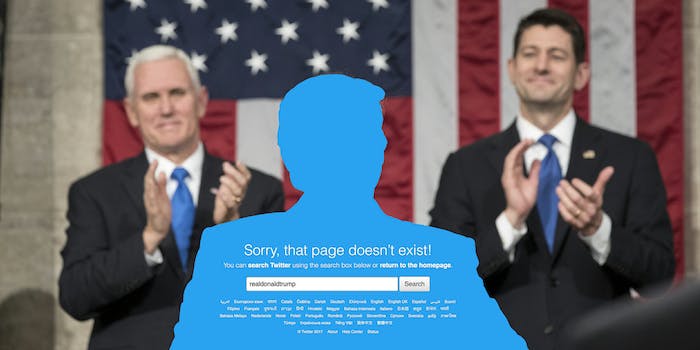 Everyone went wild last night when Trump’s account was deactivated

The person behind Trump's momentary deactivation became an internet hero.

The second late-night Twitter drama of Donald Trump‘s presidency—remember “covfefe?”— played out last night, when his account was deactivated for 11 minutes.

The mystery of Trump’s disappearing Twitter account may have lasted only a few minutes, but the brief moment in Trump and Twitter history instantly became an iconic meme.

To many, this employee became a folk hero.

promote the employee to ceo you weenies

It wasn't a mistake, @TwitterGov. Think of it as a new feature we all wanted.

Please put it on the dev road map.

Moments after Twitter issued its first statement, the company revealed that the action had been performed by an employee on their last day of work, which instantly made them a folk hero.

Please get the departing Twitter employee who deactivated Donald Trump’s account on their last day a medal, a knighthood, a magnum of champagne and a small tropical island.

Just gonna say it, the employee at Twitter who shut off Trump's account for 11 mins could become a candidate for the Nobel Peace Prize.

On his last day of work, a Twitter employee deactivated @realDonaldTrump, honoring a promise Trump never could:

Even Trump, kind of, got in on the fun.

My Twitter account was taken down for 11 minutes by a rogue employee. I guess the word must finally be getting out-and having an impact.

Although the employee may forever remain nameless, they will live on forever in the internet’s heart.