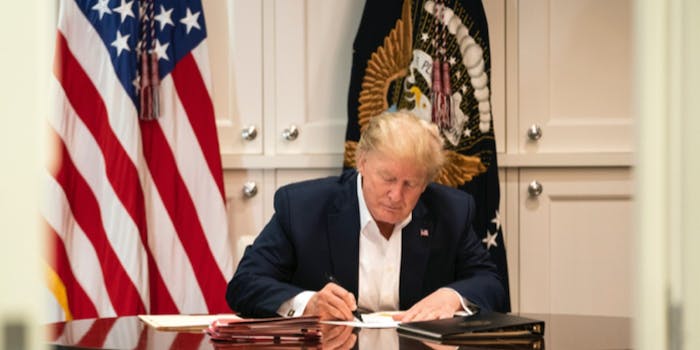 Trump mocked for writing with sharpie on blank piece of paper

The White House released a set of photos Saturday evening that appears to show President Donald Trump working at Walter Reed National Military Medical Center following his COVID-19 diagnosis. But Twitter users zoomed in one photo—in which the president is using a sharpie to write on a blank piece of paper—and have already turned it into a meme.

People think it captured Trump writing his own name on the paper in a staged photo shoot. The two released photos were taken 10 minutes apart and show the president in different settings.

People also noticed that Trump’s skin was visibly lighter than it was during Tuesday’s debate—which was attributed to his lack of self-tanner at the medical center.

Trump on Saturday recorded a video from Walter Reed, in which he said he “feels much better” and thinks he will be back at the White House “soon.”

The president also praised the experimental therapeutics he’s taking. “We have things happening that look like they are miracles coming down from God,” he said.