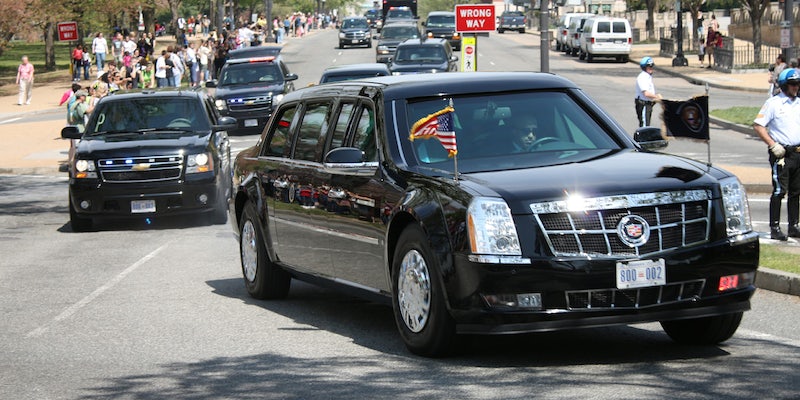 She was working for a government contractor.

Late last month, a woman biking alongside President Donald Trump‘s motorcade extended her middle finger and became a folk hero to the left. Now, she’s out of a job.

Juli Briskman revealed that her employer, Akima LLC, fired her once they realized she was the woman in the picture, she told the Huffington Post.

Briskman said that she recently changed her Facebook profile picture to herself giving Trump’s motorcade the finger, and when Akima found out about it, its HR department notified Briskman that she had violated its policy on social media posts.

“They said, ‘We’re separating from you. Basically, you cannot have ‘lewd’ or ‘obscene’ things in your social media. So they were calling flipping him off ‘obscene.'”

Briskman said she informed the company that her social media profile did not associate her with the company in any way, but Akima reportedly was concerned that her employment with the company could negatively affect their business, as they rely on government contracts. From the Huffington Post:

Briskman, who worked in marketing and communications at Akima for just over six months, said she emphasized to the executives that she wasn’t on the job when the incident happened and that her social media pages don’t mention her employer. They told her that because Akima was a government contractor, the photo could hurt their business, she said.

According to Briskman, her termination stands in contrast to a male employee at the company, who she says posted on Facebook in a thread about Black Lives Matter, calling someone “a fucking Libtard asshole.” Briskman said he deleted the post at the company’s request and was allowed to keep his job.

Read the whole interview at the Huffington Post here.