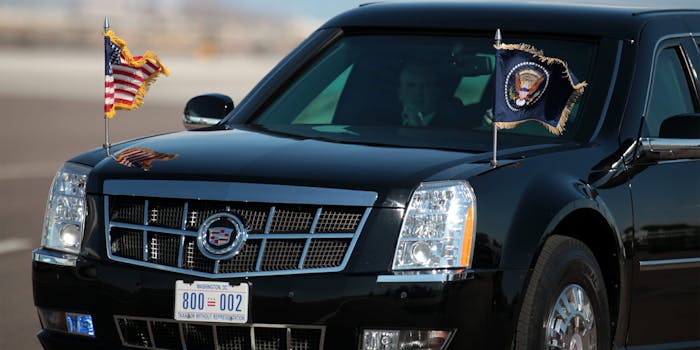 On Saturday, President Donald Trump went from the White House to his golf course in Sterling, Virginia—the 76th time he’s gone to a golf course since taking office.

But on the return home, the president got a greeting unlike anything he’s seen before: A biker riding alongside the motorcade saluted the president in an obscene way.

From the White House pool report.

POTUSs motorcade departed the Trump National Golf Club at 3:12pm, passing two pedestrians, one of whom gave a thumbs down sign. Then it overtook a female cyclist, wearing a white top and cycling helmet, who responded by giving the middle finger. The motorcade had to slow and the cyclist caught up, still offering the finger, before turning off in a different direction. Motorcade is now gathering speed and heading for DC.

That, though, wasn’t the only protest the president received during his Saturday at Trump National. Someone also took an “IMPEACH” sign to the country club.

Many online, who are vocal in their distaste of the president, shared the picture and dubbed the woman a hero.

my hometown of Sterling, VA doing me proud.

This woman is everyone. https://t.co/lJ2gNJEve6

This cyclist is all of us. 🤣 https://t.co/LopfaXufkD

As of now, the woman remains unidentified.