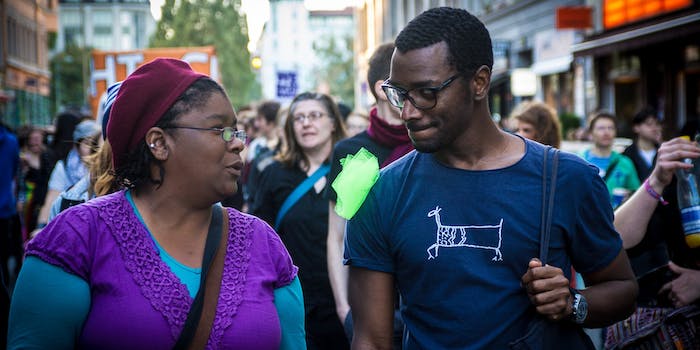 What we do and don’t know about trans teen suicide

Online communities can help, but are they really enough?

Warning: This article discusses sensitive subject matter and may be triggering for some readers.

When 17-year-old Leelah Alcorn took her own life in December 2014, she left behind a long record of harassment and loneliness on her Tumblr, culminating in her final post: a suicide note. This set off a firestorm of media attention and a vocal response from online communities–mainly Tumblr users, who believe they are raising awareness with hashtags and GIFs. Since Alcorn’s death, two more trans-identified teens, 15-year-old Zander Mahaffey, and 16-year-old Ash Haffner, have also taken their own lives. And again, a circle of the Internet has responded by discussing their suicides in an attempt to raise awareness.

But why does trans youth suicide happen, what are its causes, and does such online consciousness-raising help actually prevent more deaths?

What is becoming clear through research and outreach is that trans youth are under great levels of stress, often without family support for their gender identity, and with few trans-centric resources to access in crisis. Although suicide among trans youth has gained more public visibility, much remains unclear with regard to addressing the problem or reaching those who are most at risk.

Dr. Jody Herman, senior research fellow at the Williams Institute, an LGBT-focused think tank at UCLA Law School, told me, “Even though [scientists] have been studying this question since 1965, we’re really just at the beginning stages of research.”

Data on the subject is hard to come by, between our reticence to label trans teens’ deaths as suicide, the erasure of a minor’s trans identity by unsupportive parents, and differences across the country in tracking suicide attempts. So far there are no data to show causal links to trans youth suicide, and according to Herman, no clear evidence as yet of which interventions are most effective in reducing suicide attempts for young adults.

Meanwhile, there are concerns among researchers about the “contagion effect” of widely publicized suicide deaths. “How we talk about these deaths matters,” Herman reminds us.

If the solutions are unknown, the stressors seem more transparent. In a 2011 national survey of more than 7,500 transgender Americans, 78 percent of respondents reported suffering harassment in primary and secondary school. Thirty-five percent reported they experienced physical assaults in school, and 15 percent said they left K-12 school or a higher education institution due to the harassment. These experiences correlated strongly with weak outcomes in mental health, employment, and a higher level of suicide attempts. This research also shows that these stressors are cumulative; if a teen is facing harassment, a lack of support from his or her parents, and drops out of school or runs away from home, their risk escalates for suicidal thoughts, self-harm, and actual attempts.

If those are the data trends, what do these barriers and stressors look like in people’s lives? Staff at direct service organizations working with trans youth see them every day. Their job is to identify youth closest to the edge and help them back away by whatever means necessary. Alysia Angel, the Youth Program Coordinator at the Q-Spot, an LGBT community center in Sacramento, Calif., says she works with 100-150 young people a week. “One young trans woman of color has been coming in for two years, telling me about her suicidal thoughts,” Angel said.

However, the young woman tells Angel that something stops her each time. Angel’s approach is to remain in the present with her client and be ready with a referral when needed.

Aryah Lester, a crisis hotline counselor in Miami Beach, Fla., shared similar concerns. “Acceptance, realization of self, and conservative ideals are the main concerns I’ve heard on calls,” Lester said. People who call in receive encouragement and empowering messages, along with a reminder to reach out to friends and family.

But Ruby Corado, founder of Casa Ruby in Washington, DC, notes that many organizations focused on trans youth support are underfunded and struggle to reach the individuals who are potentially most at risk of suicide, the ones who might not take the initiative to find an organization like hers for help.

Corado would like to see that change: “Many [people] are coming in and finding help. But we need more resources to find them online.”

It seems almost impossible for groups like Corado’s to spot the troubled young adults in an Internet sea of memes and Tumblr accounts. If trans youth who come into an organization for help are showing initiative, it’s precisely the youth who are staying online and who haven’t figured out where help is who need more support.

To further complicate things, sometimes the trans youth who do get help are torn between influences. Kate Bornstein, a transgender activist and author of Hello, Cruel World: 101 Alternatives to Suicide for Teens, Freaks, and Other Outlaws said that trans youth can sometimes feel pressure from seemingly opposite sides when they seek out help.

These young adults might be feeling pressure from mainstream culture to reject their trans identity, while also getting influence from the trans community to conform to one gender. This leaves them with no place to take risks and explore their gender.

“The pressure to be one or the other is too much,” said Bornstein. “And the likelihood that these teens have explored their gender identity one hundred percent is low.” Her advice to struggling trans youth is to try and resist the binary experience, or more simply: “If you feel you’re something else, go for it.”

Bornstein wants the trans community to shift its ideas at the level of narrative and ideas so that trans youth will find them much more quickly as they peruse the web for information.

Online memorials for young lives lost provide no such counter narrative or call for finding offline support services. Herman and other researchers worry that the rallying on Tumblr may even spread the aforementioned “contagion effect” can promote copycat behavior. If a patchwork infrastructure exists to get trans youth the help they need and prevent suicide, much more attention should be directed toward those groups. There are good intentions in an insular online community, but there might not be the tools trans youth need to survive.

Photo via Franziska Neumeister/Flickr (CC BY 2.0)