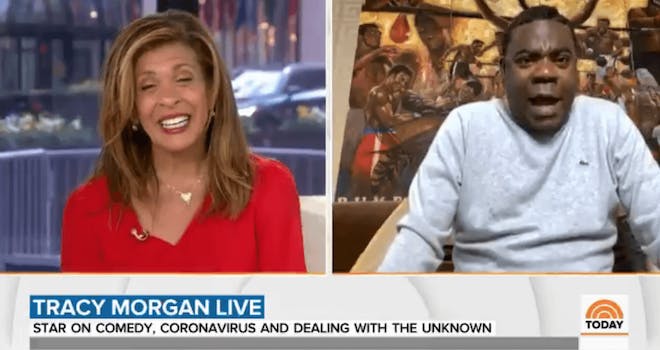 Tracy Morgan decided to have some fun this morning during his interview with Hoda Kotb on the Today show. The comedian was there to talk about the newest season of his show The Last O.G. but seemed to be channeling his Tracy Jordan character from 30 Rock.

When asked how he and his family were handling the quarantine, Morgan responded, “Oh well, me and my wife been quarantining it for like three weeks, so she’s pregnant three times. Every week she got pregnant.”

Kotb laughed and tried to move on to her next question but Morgan wasn’t finished. “We’re role-playing a lot now,” he added. “She’s playing a young maiden whose grandfather was infected with coronavirus, and I’m the scientist who discovered the cure. And she’ll do anything to save her grandfather’s life—and I mean anything.”

“Well, you are a creative one.” said Kotb, putting the best possible spin on the answer.

Morgan also referenced the tiger at the Bronx Zoo that was recently diagnosed with COVID-19, saying he plans to have his pet shark and gorilla tested. Today posted the full 4-minute interview to its official Twitter account, saying “It’s never a dull moment when @TracyMorgan is on!”

All this was not terribly shocking coming from a comedian, but it became harder to tell if Morgan was joking when he discussed President Donald Trump’s handling of the situation: “People want to criticize the president, but imagine being the president of a country and half your country got sick. So it’s difficult for him. We all got to pull together as people.”

Reactions to the interview were mixed. Some people seemed to find it hilarious while others think Morgan was out of line.

Perhaps fellow comedian Dana Gould put it best when he noted that early Tuesday morning might not be the best time to put Morgan on live television.

If all this makes you feel like you want more Morgan in your life, the new season of The Last O.G. premieres tonight at on TBS at 10:30 pm. A much more reasonable time to have Morgan on television.