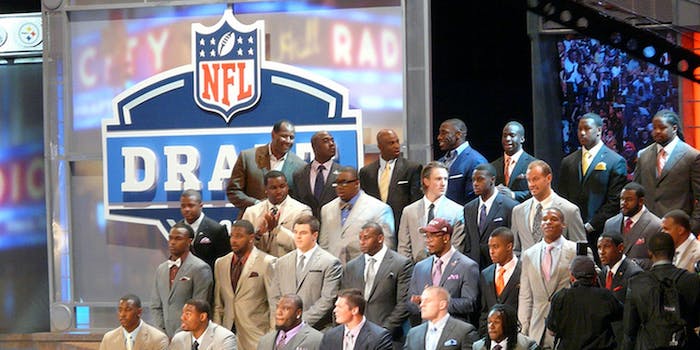 The NFL draft kicks off Thursday, and all 32 teams will try to change their organizational makeup in a way that will lead to victories and Super Bowl championships and plenty of glory.

Slightly less important (but only slightly) than all of that is how the latest draft picks perform on their Twitter accounts. Are they funny? Insightful? Full of bravado? Are we entertained by their 140-character musings? They don’t need to be dangerous, many of which we saw at last year’s draft, but they do need to be entertaining.

Here are some of the best we’ve found (in no particular order), and here’s hoping they can stay just as entertaining on the national stage as they were in college. Otherwise, what’s the point in following them in the first place?

Conley gets major points for writing and directing his own Star Wars movie, called Retribution. Forbes called Conley the most intriguing name in the 2015 draft, and that alone is a pretty good reason to follow him.

The man who almost certainly will be drafted No. 1 overall on Thursday (Bovada lists him as a 1/15 favorite to be the first man selected), but he carries with him a long list of baggage that includes accusations of sexual assault and theft. It doesn’t sound like it’ll matter, because, OF COURSE, talent and the ability to lead a team out of the doldrums trumps everything, and lately, Winston has been careful about his image. That includes his Twitter account, but occasionally, his followers will get something useful out of him. Like when he implied that losing last year’s national title game didn’t tarnish Florida State’s season.

I love my squad no matter what #FSU till the day I die D.I.E. What an amazing year we still will have the same # of Ls as the champ #LMAO

Fowler likely will be one of the first defensive players chosen, and as this recent USA Today profile points out, Fowler is big into fashion and maybe into acting or finding a spot eventually on Dancing With the Stars. Much of his Twitter account reflects his high-end tastes, so you’ll probably see him thanking custom jewelers or retweeting photos of Maseratis. And yet, sometimes he surprises us with reflections like this…

Slow down with the girls you're f*cking with If they ain't a quarterback back, there's no point of rushing it

We might not hear Sadler’s name called during the next three days of the draft, but he was good enough to be named as a Ray Guy Award semifinalist in his junior season and he’ll probably get the chance to compete for a job. That’s no guarantee Sadler will make it as an NFL player. But thank goodness we have him on Twitter.

I just asked my waitress what sport she thought I played. Her answer? Disk golf. Time to reevaluate my life.

One of the biggest questions on Thursday revolves around Gurley and whether an ACL tear near the end of last season will keep teams from picking him in the first round. He was astoundingly good in college, but in reality, he might not return to normal until 2016. Gurley also was suspended for four games last season for accepting more than $3,000 in money for autographed memorabilia, though this likely won’t affect his draft stock. Yet, that small smudge on his name hasn’t stopped him from posting autograph information on his Twitter account.

Mite as well man I appreciate it. https://t.co/bAeof2sQPP

Or retweeting other people’s invoices.

Not that it matters because he’s no longer bound by NCAA rules.

This was the man who, when visiting the White House with his teammates to celebrate the Buckeyes national title, put bunny ears behind President Obama‘s head and then asked his Twitter followers if the timing of his gag was good (he later deleted that specific tweet). So, not only is Bennett—who’s projected to go in the second or third round—a clever guy, he’s also pretty ballsy. Putting the bunny ears on the president makes you a legend. But putting it on Twitter makes you a must-follow.

I have great respect for the President and did not intend for a lighthearted antic to be construed as anything other than having fun.

Hundley might not be picked in the first round—he’s certainly not thought of as a pro prospect in the same way that Winston and Marcus Mariota are—but Hundley already has shown talent in other areas. Promotion on his Twitter account, for one. And golf. Check out what he tweeted Tuesday, only a scant two days before the start of the NFL draft.

This goes without saying, but that was a nice putt. Hundley apparently is relaxed heading into the biggest night of his professional life.

He admitted to failing a drug test at the NFL combine in February, but that likely won’t knock Gregory out of the first round. What might have really upset people, though, was questioning the awesomeness of the city of New Orleans.

Idk what the big deal about new Orleans is. Seems pretty boring to me lol wrong time of year maybe??

He had to spend the next several tweets explaining that he was referring to the city on a Monday night and in no way was trying to disparage the NFL team that resides there. Unfortunately for Gregory, one of the CBSSports.com mock drafters predicts he’ll land with the Saints anyway.

There’s little question Williams can jump high. After all, he posted a 40-inch vertical at the NFL combine in February, and here’s a little video posted on his timeline as he prepares for his future pro job.

Here’s something to think about. That video is impressive—though we don’t know how tall that box jump actually is, and either way, it’ll never be as cool as J.J. Watt’s leaps—but Williams didn’t have the top vertical jump measurement at the combine. Instead, that mark was topped by the Star Wars-directing Conley, who actually jumped five inches higher than Williams.

Don’t expect Collins to be too active on Twitter in the coming days, especially after news broke on Tuesday that Baton Rouge police want to talk to him in connection with the shooting death of a pregnant woman. Police say Collins isn’t a suspect, but his attorney told ESPN’s Adam Schefter, “We took the investigation seriously. We’ve tried to rule him out as a suspect. We’re going to provide that information to the police, and ultimately (Collins) will sit down and talk to them. But the timing is poor” because Collins is in Chicago for the draft. Though this tweet from last week likely was in regards to the draft, it also has become more ominous in recent days.

They gonna judge you for life

Photo via Marianne O’Leary/Flickr (CC BY 2.0)