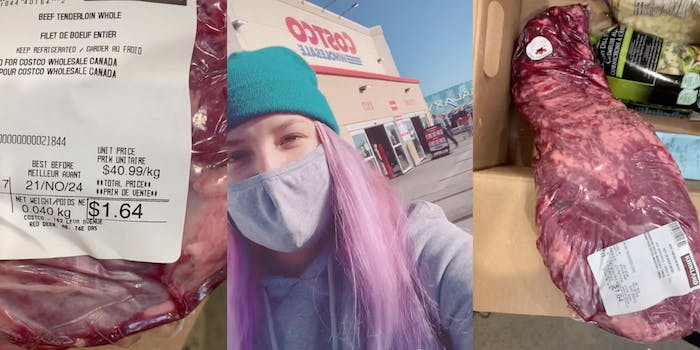 ‘Girl you won the meat lottery’: TikToker finds beef tenderloin for $1.64 at Costco

'Can’t say I don’t provide for the family,' the TikToker quipped.

A lucky woman went home with a thick piece of tenderloin for the price of a pack of gum.

“So I just found this tenderloin at Costco and I think they screwed up the price on it,” TikToker Emily Bergmann said, zooming into the $1.64 sticker price. It appears Bergmann is in Canada, so the cost is in Canadian dollars. In the U.S., the price would be $1.30.

She zooms out to show how massive the meat is, coming in at least 2.5 feet long and several inches in width at the thickest part.

The slab of meat is supposed to cost 40.99 Canadian dollars per kilogram, which calculates to roughly $19 a pound. While the item is way unpriced, it seems the real error is in how much the weight is listed as.

The beef tenderloin is listed as .04 kg which at .08 lbs is barely a fraction of a pound. That’s a little over the weight of a pencil, a slice of whole-grain bread, or a CD, according to the Weight of Stuff website. If you take a look at the hunk of meat, it’s obviously well above the weight of a slice of bread.

It worked. A close-up video of the Costco receipt clearly shows that the tenderloin was sold to her for less than two bucks. In fact, the most expensive item on her $23.41 bill is a container of cheese curds coming in at almost $15.

As she walks out of the wholesaler Bergmann giddly says, “Just leaving which is making it official. We got a whole tenderloin for a $1.64.” She lets out a sound that’s mixed somewhere between relief and excitement.

The viral TikTok has been viewed more than 3 million times since Thursday.

“Can’t say I don’t provide for the family,” Bergmann said in the caption.

An alleged Costco employee said in the comments that Bergmann did nothing wrong by taking advantage of the great deal. According to the employee, the store honors the price of any item if it’s labeled incorrectly.

People in the comments were happy for Bergmann’s once-in-a-lifetime deal.

“It was a BEEF tenderloin too. Girl you won the meat lottery on that one,” Ashley said.

“I’d never tell another story ever in my life. This would be the only thing I ever talked about ever again,” another added.

Others were poking fun at the popular wholesale store.

“That receipt checker did not understand the assignment,” Rayne Digby said, referring to the cursory look they give to make sure people don’t have unpaid items in their cart.

The Daily Dot reached out to Bergmann via TikTok comment.