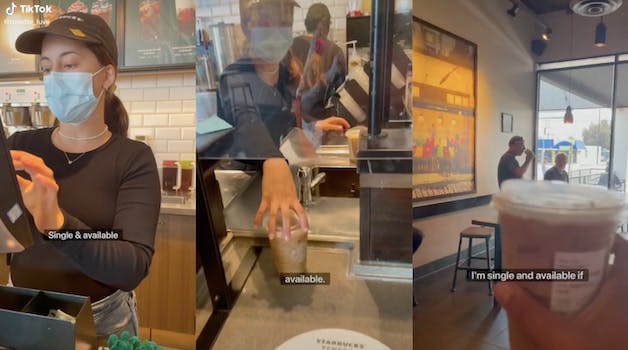 No one pays attention to her except for an older man.

In a viral TikTok, a woman attempts to be funny and announces to everyone in a Starbucks that she’s single and available. Viewers were split as to whether or not the video was actually funny or just very uncomfortable to watch.

The video starts with the TikToker, Rosette Luve, recording herself ordering a drink at the register. When the barista asks for her name, Luve says “single and available.”

The barista, confused, confirms her name is “single and available.” The video then cuts to the barista shouting out the name Luve gave them.

Luve goes on to shout that she’s single and available as she walks out of the Starbucks. “You can stop me if you want,” Luve says. No one pays attention to her except for an older man who compliments her. “I’m gonna walk out now, thank you,” she says.

Since the video was posted last week, it has received over a million views and over 159,000 likes. It has also accumulated over 6,000 comments, unsure what to make of the video.

The comments section was confused as to why she did this and some said it was “painful to watch.” One commenter wrote, “She said ‘I’m desperate in so many ways.” While another person wrote, “She thought this was gonna be so funny in her head… instead my stomach hurts from embarrassment.”

Some people defended her saying they understood the joke and thought it was funny. “Y’all calm down,” one person defended the creator saying, “She obviously isn’t this desperate. This was so funny. Thank you for being the [comedian] we needed.”

Update Sept. 9 1:47pm CT: When reached for comment, Rosette Luve told the Daily Dot that she “was literally bored at Starbucks and saw this cute guy and just thought would be cool to see if any guys would actually react.”

Luve also said that she “didn’t expect” her video, which now has 2.6 million views, to go viral.