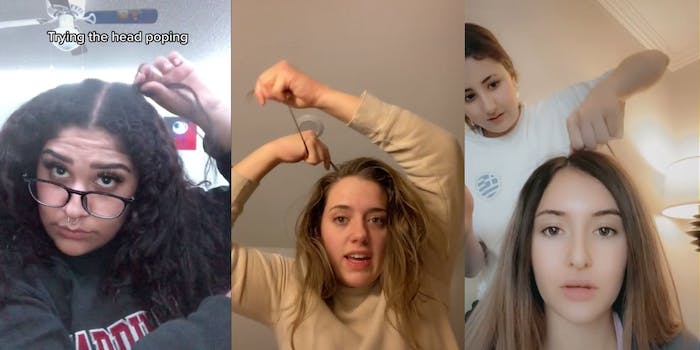 People are ‘popping scalps’ for a new TikTok trend

You’ve probably seen people crack their knuckles, neck, or back. But apparently, some people also pop their scalps.

The new trend, called scalp popping or hair cracking, has taken over TikTok. The hashtag #scalppopping has garnered about 6.4 million views.

Basically, people tightly twist a section of their hair to the base of their scalp and then pull it. It results in a loud popping sound similar to knuckle popping.

But as unusual as it might seem, the trend may not be so new.

Five months ago, Reddit user u/lizfromdarkplace posted about a facial she received at an Asian-owned nail salon and experienced the “craziest thing,” a service called hair cracking. The user said it was the “strangest sensation.”

Other users speculated that it could be related to traiditional Turkish or Asian techniques of relieving migraines.

In 2016, This Is Happening posted a video on YouTube of a woman popping her scalp to relieve headaches.

The safety and health ramifications of this practice are unclear. Until there’s more information available, it might be better to safely watch this TikTok trend instead of trying for yourself.