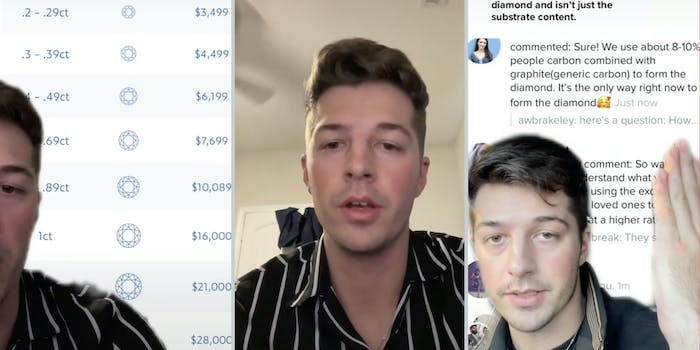 A man aiming to expose the cremation diamond industry has gone viral on TikTok after posting videos explaining how misleading the companies can be toward grieving parties.

One of the companies in question seemed to be Eterneva, which often pops up in TikTok and Instagram ads and whose statement on its website reads:

“They are grown using a lab grown application process within a high pressure, high temperature (HPHT) machine, first purifying the cremated remains (ashes) to extract the carbon left within. Cremated remains contain 1-4% carbon depending on the age of the person, their diet, and other factors.”

The TikToker, Jacob Phillips (@jakecantcatchabreak) says that furnaces used for cremation burn at 1,800 degrees Fahrenheit. He also says carbon is destroyed “beyond use to make lab-grown diamonds” at 1,400 degrees.

“A lot of geologists and diamond manufacturers say that there’s not enough left after a person has been turned into ash to make a diamond, so graphite has to be used for the majority of the diamond,” he says.

Eterneva has been criticized by diamond experts and gemologists for its chemical makeup in the past. Gemologist Robert James released a report in 2019 asserting that bodies were cremated at too high of a temperature to leave enough carbon for a diamond. He also claimed that cremation diamonds are not guaranteed to have any carbon from a loved one’s ashes in them. Diamond expert Grant Mobley also expressed skepticism of the process in an interview with Page Six.

Phillips then shows how other lab-grown diamonds, like those from Light Box, cost about $1,000 per carat. He compares that to companies like Eterneva, which charges $16,000 per carat.

“Everywhere we look companies are spending thousands to millions of dollars to figure out how to manipulate people into buying products,” he says in his video. “I have a lot of respect for people who look for creative ways to always carry around the memory of their loved ones, but let’s stop pretending that these companies are doing anything but taking advantage of people who have suffered great tragedy, and are using that tragedy to make money.”

The TikTok, which was posted Sept. 14, has 188,700 views and over 1,650 comments. Many of the responses were critical of the cremation diamond industry.

“Thank you for researching this. It’s sad because this is a really sweet way to remember our loved ones, but the vultures are always out there,” commented @bdfpgirl.

“They exist solely to leech money off of suffering, profits for pain. They ought to be condemned,” Phillips replied.

Phillips posted a follow-up TikTok yesterday addressing a comment from someone who allegedly works at Eterneva saying that the diamond contains 8 to 10 percent cremated ash. He took issue with the major markup and minimal ash makeup of the diamonds.

“Take from that what you want if you believe that’s enough to make it fundamentally different from an ordinary lab-grown diamond, but I still can’t get past the 16 to 20 times markup, when the only thing that’s different about this process is isolating the carbon,” he says.

Viewers felt like 10 percent ash makeup was too little for something so sentimental and expensive.

“Eight to TEN PERCENT??? Why would I want a product that’s only MAX 10% of the most important part of it?????” user @literallyeverybodyhere wrote.

Later in the follow-up, Phillip asks if the company has done isotope testing to prove that their diamonds are actually carbon from ashes rather than graphite.

On its website, Eterneva states it partners with research company TDI-Brooks International and B&B Laboratories to do carbon analyses on clients’ ashes.

“I can’t justify a company that seems so dubious and makes their money on people’s suffering one way or another,” Phillips concludes

He says that unless they do isotope testing, he doesn’t have any reason to believe that the carbon ash is used to form the diamond.

In comments throughout both posts Phillips explains that he recently lost his brother and that his dad died when he was younger, bringing a personal aspect to the situation.

“You wouldn’t be happy taking home ashes from the funeral home if they told you it only had a fourth of a teaspoon of ashes and the rest was sand,” wrote @kingcova.

“I felt this is my soul, I have heard so many awful stories from my customers interacting and getting burned by other companies with some getting [ghosted] and even not getting their loved ones ashes back. That infuriates me and honestly breaks my heart. You should never get into this work for money, you should do it for the passion to love and help others heal. 🥺,” said @treeofhopecreations, who makes memorial keepsakes.

Some commenters disagreed that the company was at fault and said people who bought the products in the first place were to blame.

“Ppl find something wrong with everything.. Don’t put yourself in a financial bind, no one is forcing you to get this. It’s not the company’s fault,” said @shut_up_meg916.

“Hello! I’m a crematory operator and, yes a majority of what you’re saying is accurate but no one is being forced into this expense,” commented @melwood83.

The Daily Dot reached out to Eterneva via email and Phillips via TikTok for comment.