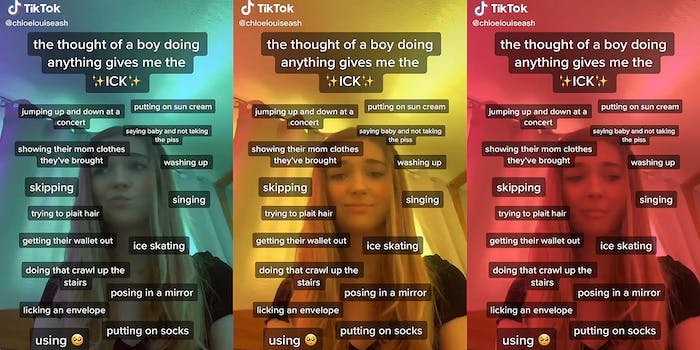 The ‘ick’ gets redefined on TikTok

What gives people on TikTok the ick? Everything.

What‘s the “ick”? On TikTok, it can be almost anything.

The ick, more broadly, is that feeling you get when some detail about the person you’re dating suddenly turns you off. Friends and Sex and the City both have episodes that use “Ick Factor” in the title. A 2017 episode of reality show Love Island brought the phrase back online, after contestant Olivia Attwood used catching “the ick” in defense of her breakup with Sam Gowland. It was used on the show again in January by contestant Leanne Amaning. Dating coach James Preece told the Independent the ick is a “gut feeling that you can’t ignore,” a less anxiety-inducing version of the fight-or-flight response. It’s a good, important thing.

On TikTok, this gut feeling has a more wide-ranging application. While many popular videos involve the ick being applied to someone you’re dating, it can also be useful in moving on from a breakup or crush. People went wild with lists of icks: that weird tomato sauce stain around their mouth, voting for Trump, riding Segways.

Comment sections are full of even more very specific icks.

Sure, a lot of these icks aren’t serious, but it doesn’t just apply to romantic partners. The ick also extends to pop culture and the current state of the world, and it’s possible to self-ick. TikTok also brought the Love Island ick audio full circle.