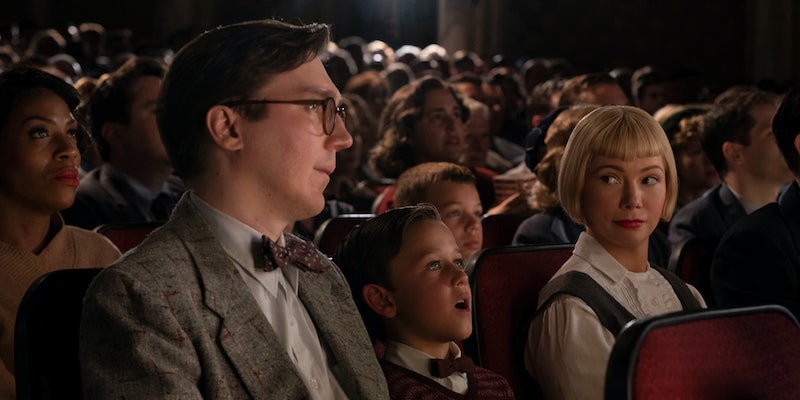 In ‘The Fabelmans,’ Steven Spielberg turns the camera on himself

It's his most personal movie yet.

Steven Spielberg sure knows how to direct the hell out of a movie. There might be a handful of duds in his 50-plus-year career that touches upon almost every genre you can think of, but watching a Spielberg movie—whether it’s a genre-defining classic or one of his more recent films, whether it’s for the first or the dozenth time—always offers something fascinating to latch onto or some kind of magical spectacle. He’s pulled off this trick again and again, for more than five decades, and yet, almost every time he does it, it feels like a brand new act we’ve never seen before.

Release Date: Nov. 11, 2022
Director: Steven Spielberg
Release: Theatrical
Steven Spielberg’s latest film is a semi-autobiographical coming-of-age epic that explores the origin behind a young boy’s love for the movies, his dream of becoming a film director, and the end of his parents’ marriage.

This time around, Spielberg is turning the camera on himself. The Fabelmans is Spielberg’s most personal film yet, a semi-autobiographical, coming-of-age epic that explores the origins of his love for movies and the meticulous art of filmmaking; several of the home movies that Spielberg’s young avatar films are recreations of home movies that he made as a kid. But, with a script written by Spielberg (his first screenwriting credit since A.I. Artificial Intelligence) and Tony Kushner (Munich, Lincoln, West Side Story), it’s also a deeply personal foray into the kind of power the moving image can display and the demythization of both its hero (to us) and his parents (for him). It gives The Fabelmans a level of nuance and complexity, making it one of the year’s best films.

The Fabelmans might feel like it might be another entry into Hollywood’s repertoire of self-congratulatory movies about the movies, and to be sure, it does occasionally lean into it. (There is a line toward the end of The Fabelmans that embraces its outward meta aspect that might make your eyes roll a bit, but by the time you get there, the film more than earns it.)

You don’t have to look any further at how Spielberg and his frequent DP Janusz Kamiński depict equal amounts of awe and terror than in the eyes of a young Sammy Fabelman (Mateo Zoryon Francis-DeFord) during his first-ever trip to the movie theater: His wide-eyed gaze upon seeing larger-than-life figures on the big screen for the first time, and his constant need to watch people as they watch his films that doesn’t go away with age, drives that home. There’s reverence and warmth in the way that we watch Sammy splice and edit the movies he makes, or how he eventually starts envisioning moments in his life as if he were shooting them.

The film behind Sammy’s awakening is Cecil B. DeMille’s 1952 best picture winner The Greatest Show on Earth, and Sammy has so much trouble comprehending what a movie even is that his parents offer two very different ways of assuring him everything would be OK. In an encapsulation of the conflicts regarding how seriously Sammy’s ambitions are taken by each parent, his father Burt (Paul Dano), a computer engineer, broke down the science of how film works while his mother Mitzi (Michelle Williams), a talented piano player who gave up her career to raise a family, describes movies as “dreams that you never forget.” But neither explanation quite smooths things over.

A shot of a train ramming into a car in the film renders Sammy speechless enough that he can’t speak about the movie afterward; he feels the need to create it over and over again with his brand-new train set. Mitzi’s solution to his potentially expensive, destructive obsession is to allow Sammy to film the crash with Burt’s 8mm camera once so he can watch that crash whenever he feels the need to. And so a dream is born, one that follows Sammy from New Jersey to Arizona, along with Bennie (Seth Rogen), Burt’s friend and colleague who’s so close to the family that the kids call him “Uncle.” A later move to California brings a rude awakening, especially for Sammy (Gabriel LaBelle, a revelation), who faces a barrage of bullying and antisemitic attacks from classmates, who are only too happy to remind him of his otherness.

By the time we meet the older Sammy, he’s spent years recruiting his family and his friends to help him with his movies; they’re often the stars and sometimes also the crew. (At one point, Sammy’s sisters critique his work, telling him he should make more movies with girls in them.) He gets to witness firsthand how the films he makes affect those around him, a power that equally excites and frightens him. Mitzi is supportive of Sammy’s endeavors, and while Burt is impressed with his son’s talent, he also only sees it as a hobby to occupy his time before he goes off to college to study something more practical.

“Art is as dangerous as a lion’s mouth,” Boris (Judd Hirsch), Mitzi’s uncle who shows up for a visit and commands the screen during the all-too-brief time he’s on it, tells Sammy. He recognizes the drive of an artist in him—and one that’s also in Mitzi, who gave up her dream and constantly feels like something is missing—but he also warns Sammy of the harm that might come with that all-consuming drive. That’s never clearer when one of Sammy’s home movies reveals something quietly earth-shattering that he, nor anyone else in his family, hadn’t previously noticed.

The Fabelmans is full of those moments, many of which were taken directly from Spielberg’s own life. It is perhaps not as bombastic as some of his larger-than-life blockbusters, but it’s every bit worth engaging. It’s a film that’s equally interested in exploring the power movies can hold on us and the ability to view those around us, especially our parents, with complexity. Williams breathes those layers of nuance into her performance into what could’ve easily been a one or two-note role.

It’s the kind of internal observation that really comes through when it comes from a director who’s become something of a mythic figure in some circles, and The Fabelmans offers him the chance to explore his own complexities. Like the best kinds of movies, it might just break your heart in the process.

The Fabelmans is currently playing in select theaters and expands nationwide on Nov. 23