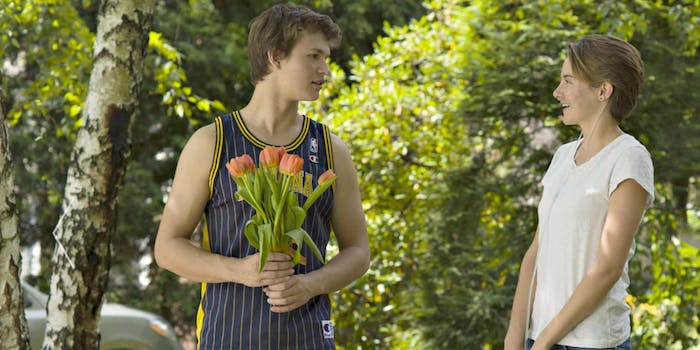 If you want to figure out the true reason why TFIOS has taken the world by storm, you need only remember where you are reading this.

If there’s one story people can’t stop talking about right now, it’s the story of how a couple kids with cancer just beat the crap out of Tom Cruise in front of the whole country.

What perhaps seemed for a time like an unlikely success, the film adaptation of YA romance novel, The Fault in Our Stars, has proven to be anything but, besting Cruise’s sci-fi/action vehicle, Edge of Tomorrow, at the box office last weekend for the number one spot. (Edge of Tomorrow actually finished in third place, right behind Angelina Jolie’s Maleficent.) And not only did The Fault in Our Stars win the weekend, it won it handily, grossing almost $20 million more than Edge of Tomorrow domestically.

There are a lot of factors that went into making The Fault in Our Stars a smash. YA (young adult) fiction has never been this popular, and the response to TFIOS feels particularly groundbreaking, as it’s really the first non-genre piece of YA fiction that Hollywood has hit big with.

But if you want to figure out the true reason why The Fault in Our Stars has taken the world by storm, you need only remember where you are reading this: the massive love for this story started on the Internet, and the Internet took that love all the way to the big screen.

It’s fair to say that The Fault in Our Stars was already a literary sensation even before the Internet got ahold of it. The book earned plenty of critical acclaim, in addition to shooting to the top of the New York Times and Amazon bestseller lists. More recently, Entertainment Weekly put the stars of the film version on its cover, seemingly solidifying that the adaptation was going to be a big deal.

However, what separates the The Fault in Our Stars from something like the equally acclaimed Gone Girl, the movie version of which also landed on EW’s cover, is that the excitement over TFIOS breached the gap between traditional media and digital fandom. Buzzfeed began generating a mountain of lists in anticipation of the film months prior to it coming out. Try looking for TFIOS on Tumblr and the results are endless —it’s worth mentioning that the movie site itself is a Tumblr.

And before the cinematic adaptation was even a glimmer in their eyes, fans created a site devoted to TFIOS back in June of 2013. Today, in addition to the standard Facebook page, the movie also has its own Twitter and Instagram accounts, and its trailer is the most liked in the history of YouTube.

It’s not strange for a film to use viral marketing in this day and age, but it is strange for it to work so well. What you see when you look at the online fervor surrounding The Fault in Our Stars is a convergence of people who loved (or are at least aware) of the book coming together in excitement for the movie.

To say that 20th Century Fox’s approach worked in that regard is to suggest that they even had a significant hand in it, which isn’t necessarily true in this case. Sure, they got the word out on social media, but this kind of online attention would be hard to generate among even the biggest comic books fans.

Variety recently pointed out that the movie was promoted through Reddit AMAs, Twitter Q&As, and live-streaming events on YouTube, but none of that means anything if there aren’t people taking part on the other end. In some ways the movie’s main promotion came out of a symbiotic relationship between the fans and the creative forces involved. In the end, all the studio really had to do to get the word out was sit back and wait for the book’s established community of Internet fans to do what that demographic does best: watch, like, and follow.

There have been several instances in the entertainment industry where the use of viral marketing has paid off before, most notably for horror movies like Paranormal Activity. But where Paranormal Activity used clever tricks like asking people to “demand” the movie and playing up the rawness of the found footage format, The Fault in Our Stars has relied on just the opposite. That is to say the digital marketing itself has been fairly straightforward, while the response from fans has been anything but.

More often than not, viral marketing campaigns fail, regardless of whether the movie they’re advertising succeeds. The most notorious example of the Internet’s difficult relationship with the Hollywood is Snakes on a Plane, which actually did have a significant online presence (The Atlantic ran a five-year-anniversary story on the film which mentions a blog devoted to said hype), only to bomb at the box office.

In Snakes’ case, the Internet may have generated interest, but it didn’t fill seats. Today, similar fascinations exist on the web with the likes of Sharknado, but there’s a reason no one’s tried to put Sharknado in (most) theaters.

Maybe the difference between something like The Fault in Our Stars and Snakes on a Plane is that TFIOS grew out of a real girl’s battle with cancer. Esther Earl, who was the basis for protagonist Hazel Lancaster, formed a relationship with the Internet based on deep sincerity, whereas the relationship between Snakes on a Plane and the Internet was based solely on silliness. The story of TFIOS and Earl’s own story are not identical, but they both demonstrate the Internet’s profound ability to create strong connections.

And if there’s one person that knows something about making connections, it’s The Fault in Our Stars author John Green. As the validity of “real” writers’ presences online continues to be debated, Green has actively and aggressively found ways to reach out through the Internet. Not only does he tweet and have his own Tumblr, but his Vlogbrothers page on YouTube, created with brother Hank, is immensely popular. He and Hank have also put out several successful web series, constructed the community-building program Project for Awesome, and founded VidCon, a convention for people who love online videos.

Green’s continued enthusiasm in the digital world puts him in stark contrast to some of the more cynical literary minds on the web. Like his writing, his online presence is opinionated, sometimes sentimental, but not intentionally abrasive. Considering his own penchant for tapping into the Internet’s power, it’s no wonder that fans of his work have done the same.

The numbers don’t lie. Excitement over The Fault in Our Stars doesn’t appear to be slowing down anytime soon, and as long as people continue to talk about the film online, there’s no conceivable reason it will. Everything about the movie, right down to the characters’ texts, feels tuned in to web-based fandom. TFIOS’ journey from the page, to the Internet, to the screen is the rare example of the digital world and the entertainment world coming together to create something completely singular.

Even if you’re not a fan, it’s hard not to admit that’s pretty impressive.