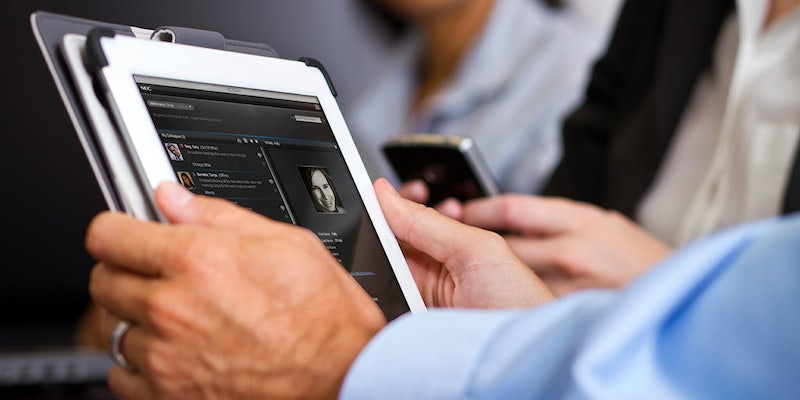 The digital future of work is leaving the poor behind

Telecommuting is putting an end to long commutes—for everyone but those who need it most.

I wouldn’t have a career if it weren’t for telecommuting. Last week, I wrote about London from my kitchen in Chicago for a website that’s based in New York. The global workforce is increasingly commuting only as far as their living rooms, replacing the cubicle with the couch and the office with the intranet. But what has been described as “the quiet revolution” is leaving some of our most vulnerable employees behind. As white-collar workers find ways to reduce their commute, blue-collar workers are facing a very different reality.

Before I burst your tech bubble like it’s 2001, I want to be clear: Telecommuting is great for companies and employees who have the option. Last year, Forbes reported that workplace mobility programs can lead to as much as 30 percent bottom-line savings for companies. Since 2005, the number of non-self-employed people working remotely has increased 103 percent, according to statistics compiled by Global Workplace Analytics.

This offers reduced overhead costs for businesses and greater flexibility for workers, who often find it easier to achieve an ideal work-life balance when working remotely. Indeed, remote workers are less stressed and more engaged.

And as Meghan M. Biro wrote in a different Forbes piece, telecommuting allows businesses to attract the best talent while enabling employees to find jobs they might not otherwise consider. As Biro wrote, “not everyone wants to, or can afford to, live in Silicon Valley, Austin, Boston/Cambridge, Chicago, Raleigh-Durham, or NYC.”

For JetBlue founder David Neeleman, you can add Sao Paulo to that list. He left that company a few years ago to found another airline, this one operating in South America. Instead of uprooting his family, Neeleman commutes from Connecticut to Brazil every week. Quartz recently profiled him and other executives who are commuting across continents rather than uprooting their families. Some do telecommute, but the face-to-face meetings and demands on executives mean they’re spending a lot of time traveling to their corporate headquarters.

Others choose international commutes because it is cheaper, albeit marginally. One London blogger found he could save £579 a month by commuting from Barcelona to London. A student at University of London began commuting to his lectures from Poland because it was cheaper than living near the university. These folks are the worst-case scenarios of what has been dubbed “extreme commuters”—anyone commuting three or more hours a day. Following the recession, the number of people making these commutes has doubled.

Oftentimes, the trend has focused on middle- and upper-class workers who commute to London or fight their way into New York or Chicago. And while Wi-Fi enabled trains have made them more productive, these long commutes are can be detrimental to health and morale. A study for the Office of National Statistics in the U.K. found that “commuters have lower life satisfaction, a lower sense that their daily activities are worthwhile, lower levels of happiness and higher anxiety on average than non-commuters.”

Interestingly, extreme commuters on whole do not seem adversely affected by their commute, which “[suggests] that the small minority of people with this commuting pattern have quite different experiences to most other commuters.” Traveling by bus for more than 30 minutes seems to be the most negative commute.

This isn’t surprising. The extreme commuters profiled are all higher-earners, and extreme commuting is frequently a choice as opposed to a necessity. Most of them are traveling in planes or trains, not waiting for 25 minutes for the next bus to show up, which is what low wage workers often face. As a study by Citi showed, the poor are disproportionately affected by the increased cost and time of commutes. Eleven percent of those polled who pay more than $21 a day to commute make less than $35,000 a year.

Blue-collar employees and the working poor rarely have a choice. American suburban poverty more than doubled between 2008 and 2012. As housing prices in cities like New York and London have skyrocketed, increasing numbers of the urban poor are being pushed to the periphery. But they aren’t just being moved out of their neighborhoods—they’re being moved out of the city.

These folks are the worst-case scenarios of what has been dubbed “extreme commuters”—anyone commuting three or more hours a day.

This is bad for low-wage employees, and it’s bad for the economy, too. “If a city can’t provide the homes its nurses, teachers, shop workers, and cleaners can afford, eventually it will choke off its own economic success,” Toby Lloyd, the head of policy at Shelter, told the Financial Times earlier this year. At least a third of workers in industrialized economies need some form of housing subsidy, yet governments aren’t keeping up with the demand as residents are displaced from their own homes. For these workers, telecommuting isn’t an option. You can’t clean an office or pour a latte through email.

Long commutes are not a uniquely European phenomenon. Across the developed world, poorer citizens are being priced out, with their commutes longer than their higher-earning counterparts. And what’s happening in the British capital is also happening in the American capital: The Washington Post reported earlier this year that DC’s legislators and CEOs have a significantly shorter commute (13 minutes) than the city’s builders or housekeepers. A study found that the lowest 25 percent of wage earners in DC have the longest commutes.

Across the country, the Seattle Times’ Janet I. Tu recently took a harrowing look at commute times and costs in the Puget Sound region. “Low-income families typically pay a higher percentage of their incomes to commute than their higher paid counterparts,” she found, adding that these extended commutes have detrimental effects on family life and personal well-being.

In her piece, Tu profiled the Nakhale family. Simon Nakhale, the family patriarch, commutes three hours a day between two jobs, meaning that he spends a third of the income he earns in transportation costs. Neither job—packing boxes at FedEx and working security at a bank—could be done remotely, so Simon has no choice to trek from his home in suburban Seattle into the city center.

And here we arrive at the crux of the issue. While the headlines are dominated by the benefits of telecommuting for white-collar employees, low-paid workers aren’t benefiting from the solutions that might keep others from trekking across Europe to make it to their cubicle on time. So the next time you stay home to work from your living room, remember the person cleaning your office doesn’t have that luxury—and likely travels farther than you to get there.

Photo via NEC Corporation of America/Flickr (CC BY 2.0)