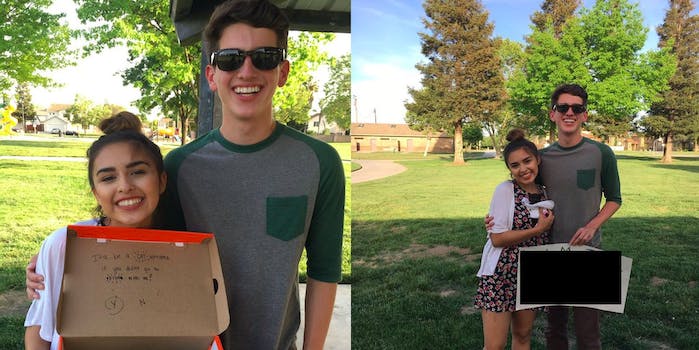 Teens cover up their vulgar promposal with parent-friendly decoy sign

Will the adults find out?

The viral promposals just keep coming. So far this year, we’ve seen reenacted births, third-wheeling giraffes, and a dude who asked himself to the big dance—and now two teens have the purrfect plan to cover up the somewhat crass humor of their would-be-viral moment.

As with any suitable promposal, Jake Bailey decided to get punny for the big ask and enlisted the help of an adorable kitten. His date was excited to open a box and see the feline offering sitting inside, with “It’d be a CATastrophe if you didn’t go to prom with me” written on the inside of the lid.

Sounds like a cute enough way to get a date for the dance, right? But Bailey also decided to go there while he had the cat on his side. After the “catastrophe” wordplay, the teen went from zero to 60 with a sign that read: “Let me take that PU$$Y to PROM.” Obviously not mom-friendly, so they had a G-rated picture as well.

It’s the classic “here, let’s cover-up our true teen ridiculousness with a cute picture of us to ward off any parental concern.” And Twitter has been loving it—the photos racked up over 11,000 retweets and 21,000 likes in less than 24 hours.

It’s unclear whether or not their moms found out about the pussy sign when the pictures popped off on the Internet. That would be the real catastrophe.