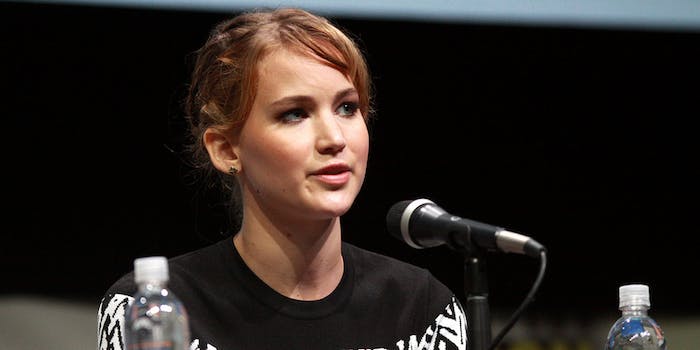 This is why the "defriend" option exists.

Over the weekend, a massive hack (which may or may not have come thanks to flaws in Apple’s iCloud storage system) led to the public release of nude photos concerning a number of celebrities, from Jennifer Lawrence and Kate Upton to Aubrey Plaza and Mary Elizabeth Winstead, as well as a host of other famous women. (Detroit Tigers pitcher Justin Verlander was also likely involved, but the leaks predominantly targeted women.)

The responses have been wildly varied. Already we’ve seen Reddit dedicate a whole page to the event, now colloquially (and crudely) known as “The Fappening.” This article won’t be linking to that, because it’ll be taking the stance that you should not look at these images.

Why? As Forbes’ Scott Mendelson astutely observed, enjoying these photos goes beyond the voyeurism that a great many enjoy in looking at naked people on the internet. The actresses in question, Mendelson argues, “have absolutely nothing to apologize for in terms of the contents of the photos or the nature in which they were leaked.” He writes, “The story itself should not be addressed as if it were a scandal, but rather what it is: A sex crime involving theft of personal property and the exploitation of the female body.”

And yet, of course, there’s the ever-depressing streak of victim blaming that usually comes in tow with this sort of thing. This site’s Nico Lang noted yesterday that the Internet has become a place that “exists for harassment,” and while it might be tempting to want to believe that we as a society have done more with it, the reactions to the pictures have suggested otherwise.

Elsewhere on the Daily Dot, Eric Geller charted some of the early reactions, celebrity and layman alike, to the incident. The lack of empathy is rather startling, if not surprising, another in a series of seemingly constant reminders that the Internet (for anybody, but especially for women) is a place where you have to tread with delicacy, lest your most private secrets—down to your real-life, naked body—become public domain.

Lena Dunham pointed out on Twitter that the rhetoric surrounding the nudes and how they came to exist in public space is nothing particularly new.

The “don’t take naked pics if you don’t want them online” argument is the “she was wearing a short skirt” of the web. Ugh.

And yet, people feel entitled to look upon them, because a) they’re there and b) if the people in those images didn’t want them there, why would they take them? Well, the ostensible answer is that they were enjoying private sexual activity with people to whom they consensually sent naked pictures, not assuming they’d end up public domain by other people who felt more entitled to their bodies than the people who may have received the pictures in the first place.

So, what I thought I’d prepare here is a handy primer for arguments you’re likely to have with somebody in the next few days over this, online or otherwise.

1) But they’re already there, and I mean, who doesn’t want to see JLaw naked?

Most do, sure, but she didn’t want you to. It might’ve happened intentionally—or in a film—or in some other venue where she and others might’ve had some autonomy over the matter. But she didn’t. This was a hack of a private phone (at least, again, as private a phone as you can have in the shared storage era), and that’s that.

2) Come oooooooooooon. I reeeeeeally want to.

There are so many naked people on the Internet right now. At least a decent amount of them have consented, by their own hand, to having their nudity on the Internet. Hell, instead of looking at stolen, invasive images, you can see virtually any sex act that might even vaguely intrigue you. As long as it isn’t something awful or potentially harmful, go for it. Have a field day.

3) Well, they shouldn’t have taken the pictures if they didn’t want them to be in the world.

Let’s run a scenario for a moment. You’ve been in a relationship or married for a solid chunk of years now. You might’ve had a kid, or the stresses of work have put a strain on the relationship, whatever. There’s no shame in that. It happens.

So, you and your significant other or others choose to film yourselves having sex. It’s an idea that’s intrigued you, and hey, it might be fun. And it turns out to be fun. And then some time later, you start getting messages from your friends, family, coworkers, and exes about how your footage leaked and they’ve all seen you have sex.

Yeah, it was the plot of this summer’s Sex Tape, but it’s also more or less happening here. Except imagine for a second that instead of your familiars watching you en flagrante, the whole damn world was. Really stop and think about that for a second. The internet has grabbed your tape and is hollering about its right to watch you bone. It doesn’t even seem like it wants to look at it, so much as it considers it something that you owe it. Would you be about it?

(Also, allow me to quickly specify. This kind of thing isn’t, and shouldn’t be, exclusively for lovingly committed relationships in sight of God and country. If you’ve agreed with somebody else to send each other nudes, and you’re both fully consenting to it, and you’re all grown adults, nobody else belongs in your bedroom. Curious that the people who scream the loudest about privacy are often the least respectful of it.)

4) Well, then they just shouldn’t have taken them at all.

Because adults shouldn’t be able to do what they do in private because there’s a risk that society will attempt to scorn them for it. That’s cool. Glad we’re beyond The Scarlet Letter as a collective.

And look. Yeah, again, it’s true that in the era of cloud computing, social media, and smart phones, privacy doesn’t mean what it once did. Mitt Romney is perfect proof of this; there are no truly closed doors anymore. And it’s scary, yeah. But to start kowtowing to a culture of fear is to allow it to propagate, plain and simple.

5) But seriously, who takes that many nudes?

How does that even matter? That sounds like that scene in Superbad where McLovin becomes paranoid that the amount of illegal booze he’s buying will somehow impact his success rate. It’s irrelevant.

6) Well, you can choose to not look at them, but I’m going to look, because I can, and it’s their fault.

Well, it really isn’t. It’s the fault of whoever hacked these, and put them on 4Chan. And have fun looking at stolen shit. Long as it doesn’t kill your vibe knowing that this isn’t particularly different from breaking into someone’s house and rifling about their sock drawers for possible Polaroid nudes, have at it. You’re contributing to a major cultural problem, and abetting the continued objectification of famous women as having to be both superior at their craft and sexually pneumatic at all times with or without their consent, but hey, if it helps you rub one out.

7) It’s my right to look at these pictures, so lay off.