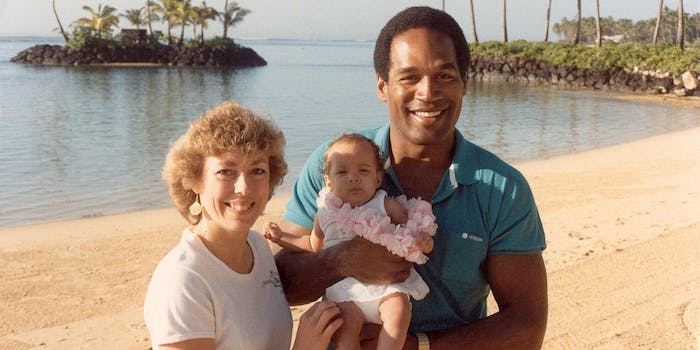 Stop comparing the Ferguson riots to the O.J. case

The Internet is failing Michael Brown.

The Internet has the potential to communicate empathy unlike any other form of media in history. Unfortunately, as much of the online response to the Michael Brown shooting and Ferguson riots makes clear, it can also push us in the opposite direction.

In a recent article on the role of online activism in mobilizing African-Americans against racial oppression, Sarah Seltzer of Flavorwire compared the approach of the Social Justice Internet with the grassroots anti-lynching campaigns of Ida B. Wells. Just as Wells became the “patron saint of muckraking journalism and anti-racist activism” by “[not] trying to maintain a face of ‘objectivity’ or bogus neutrality” but instead “using statistics, facts, and research to aid argumentative activism,” so too are social media users and bloggers using the Internet to challenge “the usual patriarchal and white-supremacist narratives that both the state and the mainstream media adopt unthinkingly.”

While the topics of social justice activism and the political use of social media have already been covered by ThinkProgress and the New York Times, insufficient attention has been paid to how racially reactionary arguments can be widely disseminated online just as much as stronger ones.

We can start with an argument that has become particularly trend—namely, comparing black outrage over Darren Wilson not being indicted with the white community’s response to O.J. Simpson’s acquittal.  One viral meme seems to capture this sentiment perfectly: “Remember how white people rioted after O. J.’s acquittal? Me neither.” 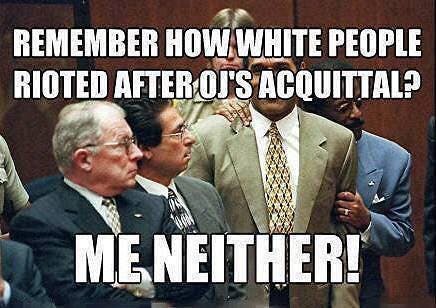 It’s appeared on The Daily Paul, a forum for libertarian political debate, on Twitter accounts, and even on our own message boards. The implication, clearly, is that if white people (a majority of whom believed Simpson should have been convicted, in contrast to most black who felt otherwise) didn’t riot then, black people shouldn’t now.

The logical flaws in this analogy are myriad. For one thing, O. J. Simpson didn’t allegedly kill Nicole Brown Simpson and Ron Goldman because they were white but over matters related to his personal life. Indeed, in terms of underlying social issues, the alleged Simpson murders—heinous though they were—had far more to do with misogyny (Simpson had reportedly abused Nicole Brown when they were married) than racism.

By contrast, the underlying social issue epitomized by the shooting of Michael Brown is the systematic oppression of racial minorities in the American criminal justice system. It was evident in Darren Wilson’s testimony in which he attributed grotesquely fearsome physical traits to Brown—even comparing him to Hulk Hogan and a demon—that are consistent with what psychologists have identified as the subconscious tendency we absorb through our culture to subscribe to “stereotypes of blacks and Latinos as being prone to certain kinds of crimes.”

Perhaps more troublingly, it also appeared in the various logical fallacies promoted by Wilson’s defenders, assassinating Brown’s character by pointing to how he had stolen cigars (which isn’t a capital offense) or insisting he had reached for Wilson’s gun even though numerous eyewitnesses claimed to have seen Brown raise his hands and announce that he was unarmed (which, though perhaps not enough to convict Wilson in a trial, more than passes the minimum standard for indictment).

On a wider scale, it can be seen in the fact that America has 25 percent of the world’s prison population (despite only containing 5 percent of its actual population), thanks both to how private prison companies influence politicians and bureaucrats to implement policies that will increase the prisoner population and to the militarization of our police forces. This is a point that has been made not only in left-leaning outlets like The Huffington Post but by libertarian-minded conservatives like Rand Paul. Due to the well-documented prevalence of racial profiling (defined on CivilRights.org as “the erroneous assumption that any particular individual of one race or ethnicity is more likely to engage in misconduct than any particular individual of another race or ethnicity”) among police officers and in our legal system, a grossly disproportionate number of these inmates are African-American or Hispanic (58 percent as of 2008).

Of course, the real reason for citing the Simpson trial isn’t to paw through the fine points of a 20-year-old murder case, but to implicitly argue that the Ferguson riots can be explained by flaws in black culture rather than the racial injustices they’re opposing. As Colin Flaherty of American Thinker put it, “Violent crime in America is a black thing.” Citing everything from random crime anecdotes to the opinions of Melissa Harris-Perry before moving on to Ferguson, he concludes that “black hostility and racial resentment towards white and Asian people are now mainstream.”

This likely goes a long way toward explaining why polls found that only 23 percent of whites wanted Darren Wilson indicted compared to 54 percent of non-whites. As Professor Saladin Ambar, a political science professor at Lehigh University and author of “Malcolm X at Oxford Union,” explained to the Daily Dot, whites can better understand the non-white response by looking at examples in history with which they might be more familiar, like the Hungarian uprising in 1956 or the Czechoslovakian uprising in 1968, in which “there were Europeans taking to the streets in sometimes violent protest against their conditions, against a government that had little regard for their well-being or justice.” In their case, this was the Iron Curtain, but for Ferguson rioters, it’s “the racial curtain that is life in black America.”

This isn’t to say that the experiences of police officers who feel threatened aren’t also valid—or that the Internet can’t be used to amplify their voices as well. As Safiya Jafari Simmons, a public relations consultant, discussed in a CNN editorial about being the black wife of a Washington D.C. police officer, “I dreaded the Ferguson grand jury response for weeks. Not simply because I knew it was likely to lead to more heartache and unrest for the black community—my community—but because it would most certainly dredge up deep internal conflict for me.”

This mirrored the observations of police officers with whom I spoke for this piece, from a family member who explained how cops become jaded because they “see the worst humanity has to offer” and the childhood friend who told me that “as a police officer who has been in a physical altercation” that required “corrective surgery,” he had been in situations where “the thing that goes through your mind is survival.”

At the same time that we maintain a balanced perspective, however, progressives need to aggressively confront the factual errors and racial privilege that continues to impede the cause of social justice. In the case of the Michael Brown shooting, it has been used to present arguments that perpetuate racist social theories (such as blaming the black community for the Ferguson riots) or engage in victim-blaming (in this case by assassinating Michael Brown’s character). Since unsound ideological currency can have as much of an effect on the political marketplace as legitimate tender, progressives need to identify and aggressively confront the common themes in the racially insensitive rhetoric and memes.