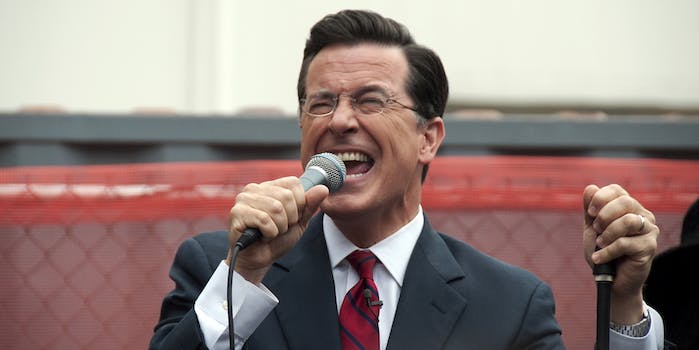 5 ways Stephen Colbert could get ‘The Late Show’ right

Under Stephen Colbert, The Late Show could become relevant again.

Ever since it was first announced that Stephen Colbert would take over David Letterman’s coveted spot as host of The Late Show, there’s been rampant speculation over what kind of host Colbert will be. For nine years on Comedy Central’s beloved The Colbert Report, Colbert has entertained millions parodying Republican pundits. After gaining popularity on The Daily Show with Jon Stewart which garnered him his own show, Colbert has been able to make a name for himself—granted, as someone else.

Sometime next year he will take over The Late Show from David Letterman (who has been hosting for 21 years) and we will be introduced to a brand new Stephen Colbert, who has confirmed that he will be shedding his popular Colbert Report persona to portray himself. It’s an interesting situation where a celebrity has gained notoriety for essentially building his career playing someone else; much like actors do. This will be a real testament to Colbert’s ability as a comedian and as a celebrity. There’s been a lot of talk about whether he’ll be able to remain popular and relevant as himself.

Beyond that struggle, Colbert faced some criticism when he was first announced. In an era of white middle-age hosts dominating late night television, some were hoping for a female comedian like Chelsea Handler or Sarah Silverman (Lauren Graham just secured a deal to play a female late-night host in an NBC sitcom). Colbert joins the ranks of yet another white guy hosting a variety show in a media landscape that has slowly become stale and devoid of variety.

Here are 5 ways that Stephen Colbert can get The Late Show right despite some of the obstacles facing him.

1) He’s younger and could inject The Late Show with some youthfulness.

The late night show formula has changed dramatically ever since the days of Johnny Carson and even Jay Leno.

With the advent of the Internet and social media, what’s made shows like The Daily Show and The Colbert Report become as popular as they currently are rests on producing viral segments or videos that manage to reach millions by touching on a popular or culturally relevant theme or topic. Jon Stewart will go on rants that will go on to get millions of views and picked up by countless sites. Even John Oliver—another former mainstay of The Daily Show—has even focused his show Last Week Tonight on ten-minute segments focusing on a singular topic.

Colbert is incredibly attuned to this social media phenomenon. It was just the other day that Colbert (whose nerdish charm is part of his appeal) went on a rant about the new Star Wars trailer, arguing why the crossguard lightsaber featured in the trailer (which has received some flak from die-hard fans) is both functional and logical.

If Colbert continues to bring this nerdish but youthful awareness to The Late Show, he could help revitalize the show that has been losing its young demographic over the years.

2) He could breathe fresh air into an old format.

As mentioned before, the late night show has been around for a very long time. The format, which consists of a host doing an opening monologue, talking to guests and then ending with a musical or comedian guest, has been consistent for decades now. Nathan Jolly of Junkee put it succinctly while praising Jimmy Fallon’s vibrant turn as The Tonight Show host: “It’s fairly undeniable that Jimmy Fallon is currently killing it as the new host of The Tonight Show, and a new study shines a light on why this may be: He shuts up more often than other talk show hosts. In other words, less talk, more show.”

Which is the problem most late night talk shows have now: They are too much talk and not enough show. Even Conan O’Brien, who infamously left The Tonight Show back in 2009 after a dispute with NBC over the time slot, came back with his own show that was still very faithful to the traditional formula.

Not many comedians or hosts wish to diverge from the classic format, but Colbert could. The late night show follows a variety show format, so let’s put some variety back into what is often considered a tired and aging design.

It already seems like Neil Patrick Harris wishes to break the mold; it was recently announced he was going to host an American version of the popular U.K. variety show Saturday Night Takeaway, which mixes comedy sketches, musical numbers and game show-esque segments. Harris said, “Nothing like this has been done before.” We need more of that kind of uniqueness in our late night shows. Colbert could not only help revitalize The Late Show but the late night show genre itself by having a little bit more show and less talk.

Stephen Colbert is part of a rat pack of TV late show hosts, including Jon Stewart, Conan O’Brien, and somewhat recently, Jimmy Fallon. During the well-known Writer’s Strike back in 2008, Colbert banded together with Stewart and O’Brien for what became late night show’s most legendary crossover ever. It started with a joke about former Republican Presidential candidate Mike Huckabee that turned into a feud between O’Brien and Colbert. Eventually Stewart got into the mix and it ended with a brawl that brought all three hosts together. Talk about turning what could have been a creative slump and turning it into a creative victory.

4) He can be livelier than David Letterman.

I know this isn’t a Herculean task. After all, Tommy Wiseau could be livelier than David Letterman right now. Even though Letterman is still on-point and funny even as he approaches 70 years of age (who can forget his epic takedown of Joaquin Phoenix back in 2010), his show has become somewhat predictable and his routine somewhat old (it is so time for Paul Simon to retire). That’s to be expected of a comedian who has been doing this for over 20 years.

What Colbert has going for him is that he’s automatically livelier than Letterman, which was brilliantly showcased in that hilarious Star Wars lightsaber smackdown. Even though he’s 50, he still has 17 years on Letterman and he acts like he’s 30. It’s that infectious energy that I hope he brings to The Late Show, could give the show the boost it so desperately needs.

Probably the biggest question mark about Colbert taking over The Late Show is what kind of comedian/host he is going to be.

We know he’s shedding his Colbert Report persona and everyone is already asking: Who is Stephen Colbert? Something tells me the real Colbert will probably somewhat mirror the sarcastic host with a biting sense of humor that we’ve grown to love, since audiences will probably expect a little bit of the Colbert they’ve come to love.

This is a great opportunity for Colbert to invigorate his image and re-introduce himself to the world. Not many comedians or celebrities get that kind of opportunity in today’s entertainment climate. He’ll have a new show and a clean slate to do whatever he wants. Let’s hope Colbert takes advantage of that. He could help rejuvenate a format this is desperately ready to be rejuvenated. It could also help revivify his career if he plays his cards right. One thing is for sure, though: Colbert will have a lot of people waiting to see what he does. I just hope the real Stephen Colbert stands up and is up to the challenge.

Although, as Lisa Respers of CNN said when she interviewed Colbert about just who he is out of character, “If anyone is used to challenges, it’s Stephen Colbert.”