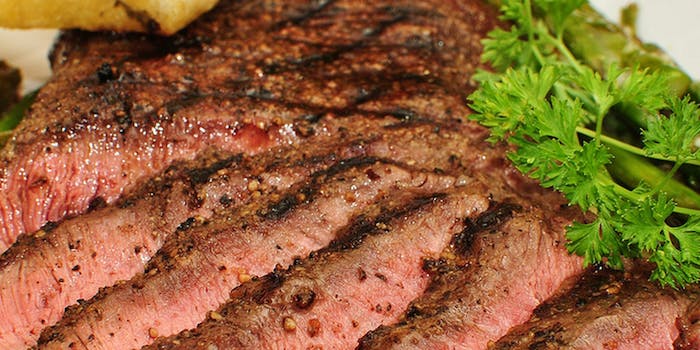 The short, stupid history of ‘Steak and a BJ Day’

The bogus holiday is more popular than ever—but it had to start somewhere.

Whenever mid-March rolls around, a bunch of dudes on the internet make noise about the prime rib and oral sex to which they’re entitled (because they didn’t complain that much on Valentine’s Day). March 14 is “Steak and a BJ Day,” and it exists because, apparently, telling your girlfriend to make you a sandwich gets old after a while. Basically, it’s a lame joke gone viral.

PR email alert for upcoming “Steak and BJ day”: “In case you find the ‘holiday’ to be crass, note it’s a fundraiser to fight breast cancer.”

I love my job. In honour of Steak&BJ Day we have a blow-up doll co-hosting the show this morning. @92citifm pic.twitter.com/kH4qmiXGga

How is a chick at work gonna say she isn’t doing steak and bj day because she doesn’t get a “romantic dinner and licked fanny day?”

So sad i don’t have anyone to cook a steak for and give a bj to tomorrow. 😢😳

Butter her up on International Woman’s Day then bring her back to earth on Steak & BJ day.

For the 2016 edition, YouTube’s the Warp Zone “figured it was high time someone gave the holiday its own anthem.”

But in truth, Werd McCompany tried to claim that honor back in 2013, with this YouTube video that bears more than passing resemblance to Psy’s “Gangnam Style.”

So. How exactly did we get here?

More than one webpage purports to be the “official” site for the holiday, though none claims intellectual property rights. They’re in general agreement that Steak and a BJ Day was the invention of radio host Tom Birdsey, who introduced the concept on an FNX show in 2002.

Still, would-be celebrants have contested this account, according to one admin: “Since [2003] I have been contacted by several people claiming to be the original founders, and many more claiming that it is March 20th, not March 14th,” he wrote in a “History” section.

#dead RT @gReEnGuY_4: And who invented “Steak And BJ Day”? Sounds like a Rick Ross-sized dude came up with it…

Imagine just how hideously, tragically sexually under-equipped the person who invented ‘Steak & a BJ Day’ must be. Or don’t, it’s horrible.

The confusion is likely down to the fact that Birdsey lifted the concept from another radio DJ, Dave Rickards, who proclaimed March 20 “Steak and Knobber Day” in a comedy bit on San Diego’s 101.5 KGB FM in 1998.

Current date dissenters presumably don’t want Steak and a BJ Day to conflict with Pi Day, which falls on the 14th (3/14 corresponds to the first few digits of the mathematical constant π). Or maybe they just feel threatened by the faintest possible parallels to Valentine’s Day. There’s evidence, indeed, that the March 20 group is a bit hardline. Check this 2008 Yelp post:

March 20th is now officially “Steak, Beer, Blow Job & Shut the Fuck Up Day.” Simple, effective and self-explanatory…this holiday has been created so you ladies can have a day to show your man just how much you love him.

No cards, no flowers, no special nights on the town, the name of the holiday explains it all…just a steak, beer, a blow job & afterwards just keep your fucking mouth shut for the rest of the day! That’s it!

Anyway, now you know that this dumb idea is just a litmus test for bro privilege (or whether someone follows shit like @MensHumor). If you have an opinion, you’ve already lost.

So enjoy hashing it out in a Facebook thread that your mom can read. The rest of us will be ripping through rare red meat and indulging in oral sex whenever we goddamn feel like it.