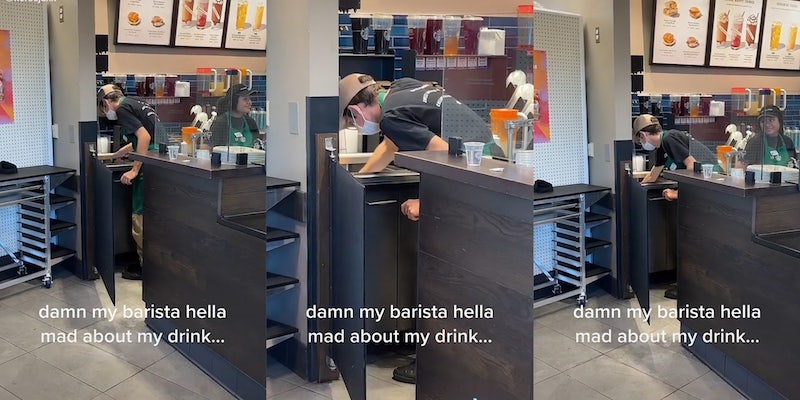 Crushed ice sounds refreshing, but what about violently smashed ice? That’s what someone is getting in this viral Starbucks TikTok, showing a barista pummelling a sink full of ice into submission.

Posted by TikToker @floresjunk, the video is captioned “damn my barista hella mad about my drink,” depicting a Starbucks barista loudly smashing the hell out of some ice. Viewers found it hilarious because the ice-smashing was just so absurdly loud and violent for a quiet Starbucks, while another barista stand silently nearby.

Of course, there’s actually an obvious explanation for this scene. “Our ice machine has been broken and we’ve had to start hitting the store bought chunks with metal pitchers to break them up so I feel this,” explained someone else in the comments section, with @floresjunk replying, “this is exactly what was happening in the video we requesition from the floor.”

“Nah their ice machine is broke and they have the chonky ice. I know this too well,” wrote another commenter.

Apparently this is a common problem for Starbucks workers. Everyone wants iced drinks during the heatwave, but ice machines don’t always work the way they should, and baristas frequently have to break apart chunks of ice by hand.

“Pls bc this so embarrassing during a rush,” commiserated another TikToker. “that ice just doesn’t want to break sometimes.” So the barista in this TikTok probably isn’t in a rage—he’s just dealing with an annoying part of the job, which is why his co-worker looks so unfazed by all the noisy banging and smashing.

The Daily Dot has reached out to @floresjunk via TikTok comment.