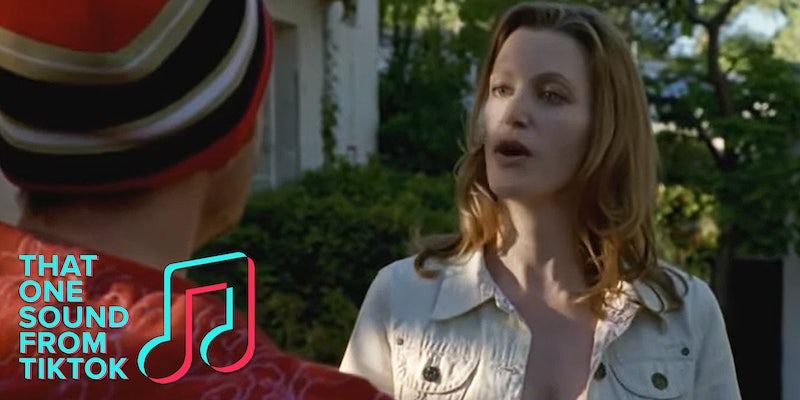 Breaking Bad has been off the air for nearly a decade and its influence continues to trickle down. The AMC series has been available on Netflix for a while, but there’s been an uptick in Breaking Bad content on TikTok recently, possibly because of the Better Call Saul finale.

And one particular audio clip from Breaking Bad is getting a lot of mileage.

The audio is from an extended conversation between Jesse Pinkman (Aaron Paul) and Skyler White (Anna Gunn), when she confronts Jesse for selling weed to her husband, Walter (Bryan Cranston).

The sound that’s circulating now was originally posted in February by @mineralsmarie and is titled “Breaking Bad funny moments”—funny mostly because of how forcefully Skyler is using “Yo.”

Earlier this month, the sound started going around again, though in a new context, as people isolated the “Do not sell marijuana to my husband” line and applied it to awkward conversations about sex, relationships, and identity.

i felt like i was handing out candy on halloween 💃🏻

it’s that time of year again 🫠

Someone also edited in well-timed booms, and turned the scene into a Google Form.

Skyler was often painted as the villain during the show’s run, though in hindsight that was just deeply ingrained misogyny. Gunn wrote about playing Skyler in 2013, the year the show ended, and how her character “has become a flash point for many people’s feelings about strong, nonsubmissive, ill-treated women.” She also notes that at the time there were Facebook pages devoted to hating her character, as well as AMC message boards.

“At some point on the message boards,” Gunn wrote, “the character of Skyler seemed to drop out of the conversation, and people transferred their negative feelings directly to me.” Skyler White existed at a time when “difficult women” on TV were driving discourse, though much of it was sexist. Of course, looking back, Walter White was the villain.

Vince Gilligan, creator of Breaking Bad and Better Call Saul, recently told the New Yorker that he’s “still thinking about” how Skyler and Gunn were treated years later: “I realize in hindsight that the show was rigged, in the sense that the storytelling was solely through Walt’s eyes, even in scenes he wasn’t present for. Even Gus, his archenemy, didn’t suffer the animosity Skyler received.”

Fans appear to have reassessed, at least in the comments of the original TikTok. Or, perhaps they’ve only watched the show recently. The comments are mostly positive: “SHES SUCH A SLAY,” “I lowkey love her.”

“This is the only bad thing skylar did in the show.”

And there are Skyler White fancams.