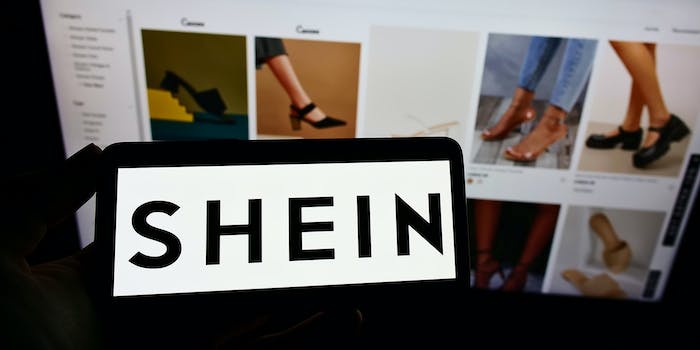 Shein debunked the original TikTok, but it's still up and has millions of views.

A viral TikTok with more than 40 million views claims Shein clothing has secret messages from workers on its tags. While the video has been debunked by both Snopes and Shein, the original video remains up, and it spawned hundreds of copycat videos.

The initial video was posted on May 25, from the account @nohroe15. It was the first video shared from the account, and its three additional videos are also about Shein. It claims to show various instances where “help me” was written or typed on packages and clothing tags. There also appears to be a handwritten note in Chinese with “SOS!” at the top.

The caption urges people to boycott the company and stop buying fast fashion, a common refrain on TikTok. Shein’s sketchy business and labor practices have previously received scrutiny, and popular TikTokers have faced backlash for partnering with the China-based company.

In the weeks since the video was shared, Snopes debunked most of the images from that TikTok, but one photo, a tag featuring the words “need your help,” took off.

Hundreds of TikTokers searched Shein purchases for the alleged cry for help. Many found the same awkwardly translated message on certain tags, though the phrase appears to be referring to first-time washing instructions.

Shein’s official TikTok account has since posted two responses to the original video. On June 1, the brand claimed, “Our strict Code of Conduct prohibits suppliers from using child or forced labor and we do not tolerate non-compliance.” It also debunked some of the images from the original TikTok, citing the actual news stories they’re from.

This week, it posted an update and addressed the washing directions tag theory more directly. “Our intention was to remind customers to help soften this fabric by usinga [sic] softener when washing the garment for the first time,” the statement reads. In the comments, people are accusing the company of lying and asking to see the working conditions at Shein facilities.

Recently, there has been some confusion about one of our product labels, and here we want to provide an update.

A November report from watchdog group Public Eye found that Shein has violated Chinese labor laws. Workers in Guangzhou, its headquarters, regularly worked 75-hour weeks with just one day off a month. The multi-factory investigation found that “Shein systematically takes advantage of the fact that these employees are prepared to forgo even a minimum degree of safety, free time and quality of life, because they feel that they don’t really have an alternative.”