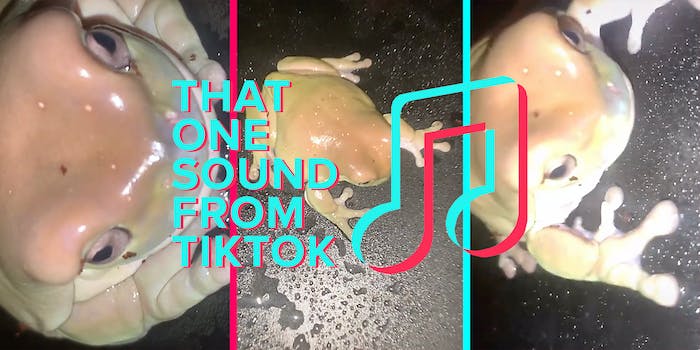 Why is that ‘Sheesh’ sound all over TikTok?

Sheesh is everywhere, but is it already over?

This week, we look at a TikTok sound that really is a sound: no dialogue, no punchline. Perhaps the purest sound covered here yet. A sound that made my boyfriend wordlessly leave the house after I played it one too many times.

The sound is a squeaky chorus of voices sing-saying “Sheesh,” mimicking the celebratory sound of noisemakers at midnight on New Year’s Eve. But way more chill. One of the first trends on TikTok was using the sound to celebrate some accomplishment in the present, future, or past.

It appears to be from the TikTok account meetjulio, which is dedicated to a TikTok-famous tree frog named King Julio. The account’s first post, from Feb. 14, features the titular frog debuting to a chorus of sheesh. Or, as the original audio is titled, “Sheeeshhh.” It’s now been used in more than 109,000 TikToks.

Sheesh isn’t a new word, but while it once conveyed exasperation, it evolved more positively online: A 2017 Urban Dictionary entry states it means “Dammmmmn.” Drakeo the Ruler references it in multiple songs. LeBron James popularized its usage on social media.

As Know Your Meme details, it was referenced in TikTok sneaker meetup parodies last summer. The Prince Family‘s 2020 music video for “Sheesh,” which collected more than 9 million views, added some cringe.

The King Julio sound evolved too, often combined with the two-finger ice in my veins pose popularized by NBA player D’Angelo Russell (and co-opted by TikTok).

The sheesh was remixed by TikToker Vinny Marchi in late April, and given a more melodic shape. In less than a month, his version, titled “Heavenly Sheeeeesh,” has been used in more than 17,000 TikToks.

We reached out to the King Julio account for comment, but a “new and improved” sheesh video was recently posted.

With Julio’s virality came criticism: A recent post on r/frogs expressed concern that the frog is not in “a good environment” or being cared for properly. There’s also been criticism that sheesh, much like bussin, was co-opted and popularized by white TikTokers.