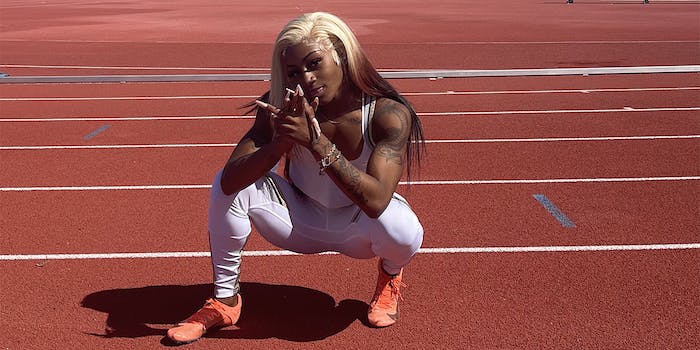 Many are wondering why weed is a still forbidden substance for Olympic athletes.

Sha’Carri Richardson is one of the breakout stars of this Olympic season, a champion 100m sprinter who is beloved both for her athletic skill and her distinctive charisma. But on Friday, the news broke that Richardson would not compete in the Olympic 100m race after all. Despite qualifying on June 19, she’s been suspended from competition after testing positive for a chemical found in marijuana.

In an interview with the Today Show, Richardson said that she smoked marijuana to deal with the grief of losing her mother last month. “I was definitely triggered and blinded by emotions, blinded by badness, and hurting, and hiding hurt. I know I can’t hide myself, so in some type of way, I was trying to hide my pain.” The day before the news broke, she tweeted simply: “I am human.”

Sha’Carri Richardson’s suspension is earning a lot of criticism, reawakening the debate about whether athletes should be penalized for using weed. For one thing, it’s not generally perceived as a performance-enhancing drug. And in many states, it’s perfectly legal. Public opinion is now at odds with the Olympics’ strict anti-drug rules. (Alcohol, meanwhile, is fine.)

Some commentators are also highlighting this as an example of how Black women athletes seem to be judged more harshly than other demographics. On the same day that Richardson’s ban was announced, two female Namibian runners withdrew from the Olympics after their testosterone levels were deemed ineligible by Olympic standards. Meanwhile the International Swimming Federation is under fire for blocking the use of a swimming cap designed for afro hair.

Richardson has now begun a 30-day suspension, erasing her qualification to represent the U.S. in the 100m sprint. Jenna Prandini (who placed fourth) will join the Olympic team instead, alongside the second and third-place 100m runners. However, the U.S. Olympic team could theoretically name Richardson to join the 4x100m relay team.