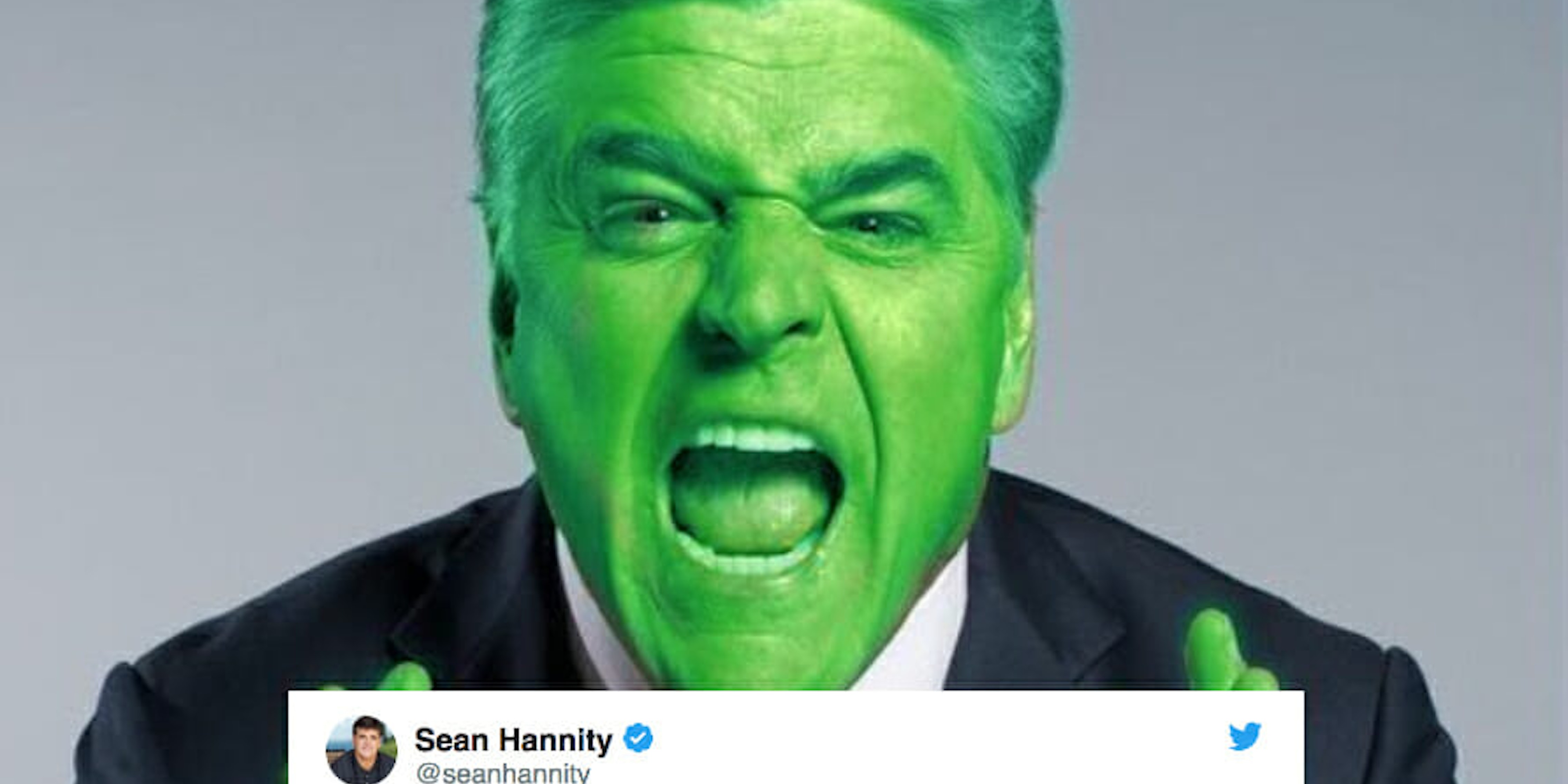 Green Sean Hannity is the most watched, most trusted meme

It's not easy being green.

Sean Hannity has mastered the art of the self-own. First, he had to quickly backpedal on his criticism of a New York Times story that said President Trump wanted to fire Robert Mueller, who was appointed to lead the investigation on Russia’s interference in the 2016 presidential election. After initially attacking the story on Fox News, he was forced to concede that, yes, sources do confirm that Trump planned to fire Mueller. The video of the whole incident was mocked on social media.

Sean Hannity: The New York Times is trying to distract you. They say Trump tried to fire Mueller, but our sources aren’t confirming that!

So how did Hannity respond to the criticism of his segment? He posted a photo of himself yelling at the camera—and he (or someone on his staff) altered the image to make his skin green. This was his caption for the tweet: “Also liberal sheep think I should run wild with @nytimes anonymous sources and not confirm myself. Sure, I trust @nytimes that put this picture on the cover of their magazine (I added the green).”

Yes, he added the green! Why? Who knows! Several people replied to the tweet asking why he chose to post an unflattering photo of himself, but Hannity has yet to respond. The original photograph was taken from a New York Times magazine profile on the Fox News host. And it wasn’t the only photo of Hannity in the story:

Nonsense. You were mugging for their cameras pic.twitter.com/rHZ1FLhDMR

People compared the green Hannity photo to the Wicked Witch of the West.

“This investigation is nothing but a witch hunt!” pic.twitter.com/1c18FZD1m3

And the titular character in The Mask.

Some people tweeted their own green-hued photos, along with the phrase “I added the green.”

Picture from my audition for Shrek, which the liberal sheep did not report on (I added the green) pic.twitter.com/0wrRLC93vz

And a lot of people were just really confused. Why would he post this photo? If only we knew what goes through his mind…

“I’ll show you how untrustworthy they are: Just look at this photograph I posed for, making a face I chose to make, which I have altered to make it look worse!” https://t.co/QxoZc8Qnnv

You posed for the picture.

You seem to have been aware that a picture was being taken.

You photoshopped it green(?)

Then you post it and claim it indicates some kind of bias against you? https://t.co/iMLZ1KK2sp

Clearly, it’s not easy being green.