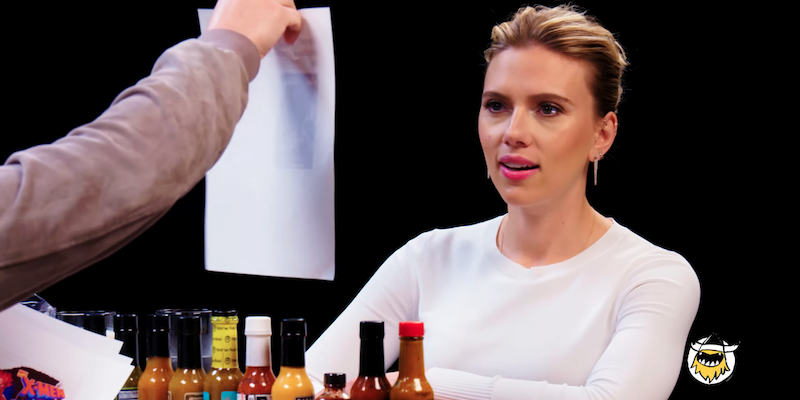 If you’ve ever seen an interview with Scarlett Johansson, which is pretty unavoidable with the nearly constant press the cast has been doing for Avengers: Endgame, it’s obvious that she’s a funny and intelligent human being. How then can such a person not know what a meme is in the year 2019?

It turns out the acclaimed actress has zero social media presence. No Facebook, no Twitter, no Instagram.
“I can’t think of anything I’d rather do less than have to continuously share details of my everyday life,” she once said in an interview with Arianna Huffington (see, we told you she was smart).

The question about memes came up while she was on the YouTube show “Hot Ones,” which features celebrities doing an interview while eating progressively spicer wings. Johansson was already five wings deep when host Sean Evans asked her about one of the biggest memes of 2018: “The Most Ambitious Crossover Event In History“.

For those unfamiliar, the meme is a play on Marvel’s claim that Avengers: Infinity War was the biggest crossover event of all time. On March 19, of 2018 journalist Bobby Palmer tweeted a counter-argument that in fact, Disney channel’s mashup of That’s so Raven, The Suite Life of Zach and Cody, and Hannah Montana, actually had them beat.

Marvel: 'Infinity War is the most ambitious crossover event in history'
Me: pic.twitter.com/NStBNq1ezx

If Palmer is indeed correct, Disney technically owns both of the most ambitious crossover events in history, since the company bought Marvel in 2009.

At any rate, people recognized Palmer’s point and began posting other contenders for most ambitious crossover.

Marvel: "Infinity War is the most ambitious crossover event in history"

Evans then showed Johansson a few examples of the meme starting with Space Jam, which she immediately saw as a valid argument. “Actually that’s a good point,” she said. “I mean like Space Jam, that was basically everything.”

Marvel: 'Infinity War is the most ambitious crossover event in history'
Me: pic.twitter.com/AMOsspsvKi

Another example included a Pop-Tart in a bowl of ravioli. Again, Johansson is able to see exactly what’s going on in the meme. “Is it like a pocket thing? That there’s a filling inside?” she asked, unknowingly nailing the premise behind the 2017 meme/debate “Are Pop-Tarts ravioli?” Oddly enough, Evans is the one who doesn’t get the meme, answering: “I think that they’re just crossing over a breakfast pastry and then some Chef Boyardee.”

Following a couple more examples, Johansson asks the question most of us probably asked when memes were first explained to us: “Is that a meme?” She then adds: “Or does a meme move… no that’s a… what’s that?” Our only guess is that she’s referring to GIFs.

“This is awesome,” Evans blurts out, echoing the sentiment anyone watching the video must be feeling.

You can check out the full interview below. The section about memes crops up around the 8-minute mark.

Also, let the record show that Johansson tried all 10 wings, unlike that big baby Shaquille O’Neal.