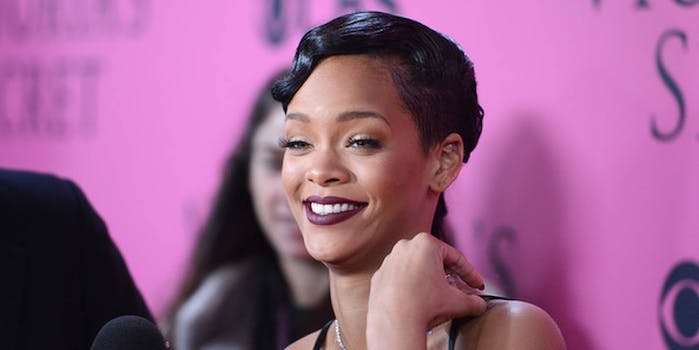 Rihanna can’t wink—or is that what the lizard people want us to think?

The Illuminati are probably behind this.

A viral Twitter thread has turned Rihanna fans into GIF-scrutinizing detectives. It suggests that Rihanna, a living goddess who is capable of swerving on Drake himself, is incapable of winking.

That’s right. She can’t shut just one eye. She has to shut both.

We have to admit, @NotAgainBen presents pretty compelling evidence.

It started with such hope but nope, that's a blink pic.twitter.com/GzwwcjyaPz

He argues that even when it looks like Riri is winking, she’s actually blinking.

This looks like a wink but on closer inspection… nope, blink pic.twitter.com/pOwy2hxl48

Her “method” is meant to cover her inability to wink.

You see Rihanna's method is to close both eyes and then open one before the other which… well that's not winking pic.twitter.com/M0MIyWjoLm

But @NotAgainBen is onto her.

She goes in with her left eye BUT THAT GODDAMN RIGHT ONE can't let it go and live. pic.twitter.com/E3XIdcMxTH

And he’s not letting this go.

Even if Rihanna seems to give zero fucks.

Because @NotAgainBen cares. He cares a lot.

This is better but see that other eye noT LETTING THE OTHER ONE BE FREE pic.twitter.com/5rhk5TjdjZ

He swears the critique is coming from a place of love.

So yeah, she's a queen in life but Robyn Rihanna Fenty can't wink. Who knew?

And he won’t stand for you telling him he’s wrong.

For everybody telling me this is her winking HER OTHER GODDAMN EYE IS HALF CLOSING TOO pic.twitter.com/5qofnjdhw2

But is he wrong, though?

we need to examine what's happening in this one… look closely… does she land the wink at Drake??? pic.twitter.com/s4pI1MOjb3

Some have argued that there’s a simple explanation for all of this.

But surely there’s more to the story.

We already know Rihanna hangs out with Tupac’s ghost.

And she’s a self-proclaimed “illuminati princess.”

And, dear lord, she listens to heavy metal?!?!

You know those blinks have got to mean something—but what? Break the silence Rih! Tell us!

Rihanna is so bad pic.twitter.com/1xuw0vwtL0

We know there’s a conspiracy here!

Rihanna is a conspiracy theory, no way a human looks like that without genetic modification

Rihanna has to be a robot she is too perfect

It all adds up.