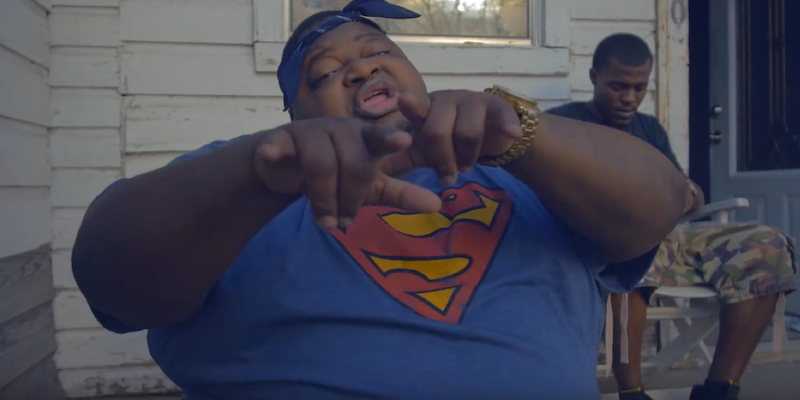 In real life, Corey Struggs is a Dallas-based rapper. Online, he's a meme.

On an overcast day in Dallas last November, EMTs wheeled rapper Corey Struggs (aka C. Struggs) out of his house on a gurney, loaded him into an ambulance, and rushed him to the hospital. In the eight months before the incident, Struggs had experienced regular headaches and nosebleeds. He thought he had a bad sinus infection, but his condition was far more serious.

The Dallas rap scene, where C. Struggs’ reputation has been steadily growing over the past two years, got the bad news from a viral video that hip-hop channel Say Cheese TV shared. It wasn’t immediately clear what had happened, but Struggs revealed to the Dallas Observer a week later that he had cancer. Doctors found tumors in his head and neck, and he made plans to start chemotherapy.

Teens and 20-somethings around the country were upset about Struggs’ cancer diagnosis. On the internet, Struggs isn’t just a Dallas rapper. He’s also a popular character in a meme. The meme, called “Big N*gga,” shows Struggs, a large black man, constantly saving the world in Photoshopped “news” images. Memers jokingly idolize him, imagining him as a huge, unstoppable, almost mystical force. The internet created the character using photographs that were taken from Struggs’ music videos and Instagram posts.

In real life, Struggs has been rapping for more than a decade. He’s made a name for himself in the Dallas scene with “gritty, grimy” lyrics about his experience growing up in and around the drug game. He’s a huge man, physically (he weighs 400 pounds) and vocally, and he plays up that persona in his music.

Struggs said people were laughing at him for being a “fat n*gga rappin'” until 2016, when bigtime rapper Rick Ross noticed him on social media. The haters and C. Struggs himself were shocked when Ross offered to collaborate on a song. That track, “Do It,” helped him blow up locally. Now he has his own independent record label, Clone Free Music, and he’s released a handful of mixtapes, culminating with 2017’s “Why Not Hustle?“

But online, he’s “Big N*gga,” a super-powered, larger-than-life character, often seen toting a gun, who can do the impossible thanks to his immense size. Memers Photoshopped his image into all kinds of heroic CNN news screenshots, with headlines like “Big N*gga is a time traveler,” “Big N*gga blocks asteroid,” and “NASA reveals Saturn is actually Big N*gga with Hula Hoop.” There’s nothing he can’t do.

It’s not exactly clear how Struggs became the face of the Big N*gga meme. Reddit moderators familiar with the meme told the Daily Dot that Struggs was discovered by “some random guy who made a Facebook page for Big N*gga memes.” They speculated that the meme “originated from some video or picture of him where he was holding an AR.”

Here’s the photo they’re talking about, used in a recent meme:

With “Big N*gga,” Struggs has been sucked into the bizarre world of “deep-fried” memes. These are images that have been drowned in layers of Photoshop filters and grainy JPEG artifacts. The characters typically have glowing laser eyes, and the “B” emoji is employed to replace random consonants in words. In 2018, deep-fried memes can be about anything, but they started out as “ghetto memes” that mocked black culture. Predominantly white meme posters enjoy using the “B” emoji to spell “niBBA,” a way of co-opting the word “n*gga” from black people, but they stop short of actually using the word.

Big N*gga (sometimes spelled Big NiBBa) occupies a similar space in the meme-sphere. In the fake headlines, Big N*gga is always “boolin’ on” or “bout to yeet on” something. The memes are intentionally misusing black slang for comic effect: boolin‘ just means “hanging out” and “yeet” … well, yeet is an exclamation that can kind of mean anything.

To meme makers, Struggs the rapper hardly factored in—he was just an imaginary superhero who was fun to make jokes about.

“It’s just (mostly) non-adults memeing around with the idea because they find the concept of him going around doing crazy shit and saving the earth from all sorts of danger funny,” the creator of the r/BigN*ggaSaga subreddit told the Daily Dot. (With 10,000 subscribers, BigN*ggaSaga is one of the most popular places to share Big N*gga memes.

But the Big N*gga meme changed dramatically once the kids participating in it learned that the man behind the meme had cancer. Suddenly, he was more to them than a punchline or a made-up superhero. As they were learning from the Dallas news stories about Struggs’ health, cancer isn’t the hardest thing he’s faced in life. It’s just the latest challenge.

Struggs has talked in YouTube interviews about growing up in drug houses with a mom who suffered from addiction. He lost his dad at age 11. He lost sight in his left eye at age 18 or 19—It just got blurry one day and never got better, and now the iris has turned gray.

Then he dropped out of college as a sophomore when he found out he was going to be a father. He told the Dallas Observer he returned to the streets to support his growing family by moving drugs. And it only gets more brutal from there: In 2014, he lost his 7-year-old son in an accident. He told the Observer his son was his biggest fan. That memory—along with the desire to be a role model for his two other children—is what motivates Struggs to keep doing music.

The cancer diagnosis has been devastating for Struggs, his family, and his career. Struggs’ older brother, Wendell Richardson, started a GoFundMe fundraiser for Struggs’ medical expenses. On the GoFundMe page, Richardson revealed yet another tragedy: their mother is in hospice care.

The news of Struggs’ illness, his financial need, and his impending surgery quickly got back to the redditors who had turned him into a meme. “Big N*gga has the big cancer,” one poster glumly announced, linking to Struggs’ fundraiser page.

Halfway through March, the moderators of r/dankmemes, one of the most prominent and influential meme communities on Reddit, chose Big N*gga as February’s “Meme of the Month.” The monthly meme is typically chosen via a popular vote of the subreddit’s subscribers, but the mods made a special exception for Big N*gga because of Struggs’ cancer.

r/DankMemes is especially sensitive to the diagnosis because one of its heroes, Icelandic actor Stefan Karl Stefansson, has inoperable stage 4 cancer. Stefansson played campy villain Robbie Rotten on the kids’ show LazyTown, and his character is the subject of many tremendously popular memes. r/DankMemes voted him Meme of the Year in 2016, and redditors donated thousands of dollars to help with his chemotherapy and operations.

Now the group is doing the same for Corey Struggs. The situation is somewhat more complicated, though.

Stefansson is a meme because of a character he played on TV, but fans feel a personal connection to the actor—who, by all accounts, is an extremely nice guy. Stefansson has embraced being a meme, and even thanked his dank memer friends for their support during his treatment. Struggs is a meme because of “Big N*gga,” a character the internet made up without his consent and without knowing much about him personally.

Struggs’ older brother, Wendell Richardson, told the Daily Dot by phone that he and Struggs don’t mind the memes—they’re just glad for all the support they’re getting from around the country. “It all motivates him and inspires him—you know, from where he comes from … it’s all motivation. We have fun with it,” he said. He added that he and Struggs joke with each other about their weight, so that kind of humor is no big deal to them.

Richardson is shouldering a lot of the burden for his family right now, driving Struggs to doctors’ appointments and recording sessions, fielding media requests, taking care of kids, and still holding down his day job cutting hair.

He said Struggs is doing okay, but “the reality set in” last week, and “his mind was more on his situation.” It’s especially difficult when Struggs and his family are still hurting from the loss of Struggs’ son just a few years ago.

That’s the daily struggle that Struggs’ online fans don’t see. In their donation messages on his GoFundMe, white donors (or donors with white faces as their avatars, anyway), overwhelmingly refer to him as “Big N*gga,” or “Big Nibba” if they’re feeling sheepish. They thank him for the made-up heroic exploits of his meme character. They tell him to “keep boolin’ on that MF cancer.” Some include links to the memes on Reddit. Few call him C. Struggs or Corey, and his music doesn’t come up often.

“The big cancer ain’t getting my big n*gga,” writes one fan.

It can be uncomfortable to watch a group of (mostly) white, (mostly) young, extremely online people create “n*gga” memes about a black man on the same page his family is using to raise funds for his medical needs, but redditors say their intentions are good.

“I can’t answer for the wider meme community on whether or not they’re worried about him finding it offensive,” one r/dankmemes moderator told the Daily Dot.  “There is a vocal minority on /r/dankmemes that actively want to make offensive memes, unfortunately, but usually the votes bury those where they belong. I would hope that people wouldn’t call him big n*gga IRL without knowing how he felt about it, but who knows.”

“I’d argue that in some aspects the meme is racist but overall I don’t really think people have racist intentions when using it despite the whole premise of the meme being reliant on overweight black people,” the creator of the BigN*ggaSaga subreddit added.

Though the memes themselves may be problematic, Struggs’ meme fans are sending him their money and their wishes for good health. They make up most of the comments on his fundraiser page, and presumably account for most of the $9,000 the page has raised over the three months it’s been active. (Stefan Karl Stefansson’s page raised $170,000 over 16 months.)

Struggs underwent his first surgery on April 3, and Richardson announced on the GoFundMe page that it was a success.

“He may be having a few more surgeries shortly…He’s doing great,” Richardson wrote. “We all know this is a lengthy process…With God on our side as well as all the support from all of you we are definitely preparing to continue to overcome this trial.”

Last week, Richardson told the Daily Dot that Struggs is happiest when he’s with his kids or making music, both of which distract Struggs from his situation.

Despite the way he’s portrayed on the internet, “Big N*gga” isn’t an invincible superhero in real life. He’s a man who’s lived through more tragedy than most, and now he’s dealing with it in the only way he can.

Update  4/9/18: On Sunday, April 8, C. Struggs had emergency surgery to keep his kidneys from failing, according to his family. He has now started dialysis, and he’s scheduled for another surgery on Monday.