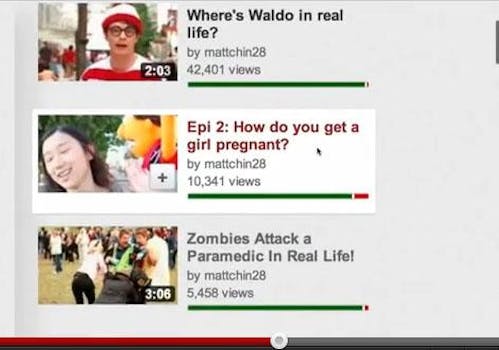 Leave it to Reddit to fix one of YouTube’s problems

With a new plugin by Bill Snitzer, users can see the rating for related videos on YouTube without having to click through on the link.

Earlier today YouTube unveiled a batch of new tools and an analytics system. The video-sharing site still has a glaring flaw, though: You can’t tell how an accompanying video in the sidebar has been rated until you click it.

But now you can, thanks to a simple plugin developed by a redditor.

Known as bmacs on Reddit, Bill Snitzer created a plugin that shows related videos’ ratings bars, making surfing for quality videos less of a gamble. Available for download on Chrome, Safari, and Firefox, the development fixes a problem that redditors have long complained about.

Snitzer posted an explanatory video to Reddit in the early hours of Wednesday morning. It’s already reached the site’s front page, with over 4,500 upvotes.

The plugin was met with high marks across the board.

“awesome! this is THE revolutionary extension…this changes everything,” wrote gfaddy.

“This makes Youtube so much better! Now I don’t have to waste time on crappy videos,” typed mach28.

A few redditors were particularly impressed that Snitzer posted such a helpful link on the one-year anniversary of his Reddit account, also known as his cakeday.

With any luck, that’ll be when he revamps YouTube’s sloppy comment system.