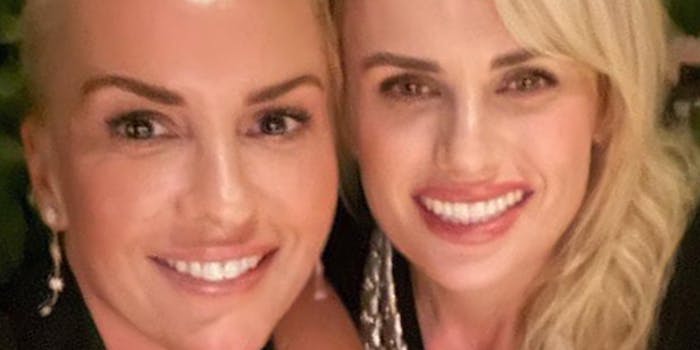 An Australian outlet faced widespread scrutiny over the weekend when a columnist seemed to complain that his attempt to report on Rebel Wilson’s relationship with a woman led to Wilson revealing it before he could.

On Thursday, Wilson posted a photo of herself with designer Ramona Agruma on Instagram, revealing that the two were in a relationship.

“I thought I was searching for a Disney Prince… but maybe what I really needed all this time was a Disney Princess,” she wrote in the caption, which included several emoji and the hashtag #loveislove.

Wilson revealed last month that she was “happily in a relationship,” although she didn’t mention her partner by name. The news that she was dating a woman was met with support, including her Pitch Perfect co-star Skylar Astin, who said that “coming out is obviously such a big part of her story” in response to the news.

In some recent instances, celebrities revealing that they’re queer or part of the LGBTQ+ community is a lot more casual than it used to be. But the news that Wilson announced she had a girlfriend took a darker turn over the weekend following the publication of a column from the Australian newspaper The Sydney Morning Herald, which suggested that Wilson’s post came as a result of someone attempting to publish a piece on her relationship.

In the column, which has since been retracted, Private Sydney columnist Andrew Hornery explained that he had been working on a story about Wilson’s relationship with Agruma. He gave Wilson’s representatives two days to comment on it before publishing a piece about the lack of interaction. Hornery started off by noting that outing celebrities in same-sex relationships “should be a redundant concept in 2022,” and he seemed annoyed that Wilson posted about her relationship with Agruma on Instagram instead of responding to his request for comment.

“Big mistake,” he wrote. “Wilson opted to gazump the story, posting about her new ‘Disney Princess’ on Instagram early Friday morning, the same platform she had previously used to brag about her handsome ex-boyfriend, wealthy American beer baron Jacob Busch.”

Calling the Instagram post “underwhelming, Hornery added that while Wilson’s decision to keep her relationship with Agruma private was her own business, she did not do the same when she was in relationships with men, appearing to suggest an air of hypocrisy.

You can read an archived version here.

As Hornery’s column went viral, people were horrified at the concept that in 2022, a news outlet still thought that outing a celebrity in a queer relationship was OK and that her post with Agruma when she did wasn’t completely her choice.

“I am so beyond disgusted at this,” @sapphoslibrary wrote. “turns out rebel wilson only came out to avoid being forcefully outed and now that newspaper is pissed at her for ruining their scoop?? so they wrote this mess?? i am so angry and so sorry for rebel, no one deserves this.”

In a note published Sunday, Sydney Morning Herald editor Bevan Shields pushed back at the suggestion that the column “outed” Wilson, pointing out that asking Wilson for comment and giving her a deadline was part of the paper’s standard practices.

“Our weekly Private Sydney celebrity column last week asked Wilson if she wished to comment about her new partner,” Shields wrote. “We would have asked the same questions had Wilson’s new partner been a man.”

Hornery wrote his own piece admitting to mistakes made in an opinion piece that went online on Monday. He broke down what happened and the extent of his communication with Wilson’s reps. He now calls the framing of his email to Wilson’s reps “a mistake” and noted that “I understand why my email has been seen as a threat.”

“I genuinely regret that Rebel has found this hard,” he wrote. That was never my intention. But I see she has handled it all with extraordinary grace. As a gay man I’m well aware of how deeply discrimination hurts. The last thing I would ever want to do is inflict that pain on someone else.”

Wilson largely remained mum as the backlash to the Sydney Morning Herald’s column played out. But on Sunday, she thanked people for showing their support during what she called “a very hard situation.”

“Thanks for your comments, it was a very hard situation but trying to handle it with grace 💗,” Wilson tweeted.