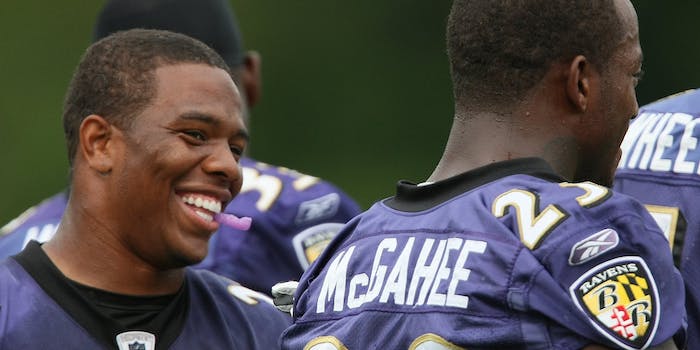 If the Internet were the 40-yard dash, Wikipedia editors would be Chris Johnson.

Wikipedia’s editors appear to move even faster than recently released NFL running back Ray Rice—or “Raymell Douchebag Rice” as a recent edit to his page claims.

The Baltimore Ravens released Rice today following public outrage over the surprisingly light two-game suspension he received from the NFL for assaulting his wife in an elevator and rendering her unconscious. After the full video of the incident was leaked this morning, the Ravens were left with little choice but to act swiftly.

Perhaps swifter still were the people who moved to update (and troll) Ray Rice’s Wikipedia page to include the development.

At first the changes simply expressed disbelief that Rice was still permitted to play in the league and speculated that his birth certificate contained names like the aforementioned “Douchebag.”

Once the team officially released Rice, most of the alterations began to reflect Rice’s status as a now ex-Baltimore Raven, while other edits suggested another title—wife beater.

Wikipedia page vandalism is nothing new, but if I’m going to mention how fast Rice’s critics were at trolling his page, then I’d be remiss not to make note of the all-pro editors who were busy weaving through and cleaning up the page.

Within a few minutes of the “wife beater” edit, a glance at Raymell Mourice Rice’s page showed no evidence of anything out of the ordinary.

If the Internet were the 40-yard dash, Wikipedia editors would be Chris Johnson.