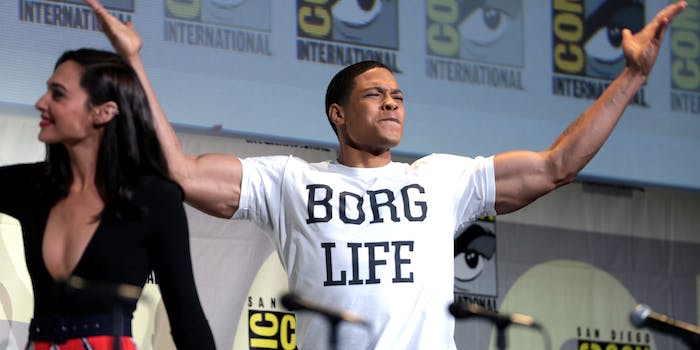 Ray Fisher's barber was left off the 'Justice League' credits.

Ray Fisher, the actor who played Cyborg in Justice League, is continuing to speak out about problems he had while working on the movie. Last month Fisher tweeted that director Joss Whedon‘s on-set behavior was “gross, abusive, unprofessional, and completely unacceptable”—an accusation that hasn’t been publicly supported by other Justice League actors, but follows a pattern of reports regarding Whedon’s treatment of some actors and crewmembers in the past. Now Fisher is speaking out on behalf of his barber, whose name was left off the credits despite working on Justice League for eight months. According to Fisher, this plays into a long-running trend of racial discrimination among hair and makeup teams in Hollywood.

Cyborg was the only Black character in Justice League‘s main cast, and when Whedon took over from the original director Zack Snyder, Fisher’s screentime was reduced to an arguably tokenistic role. Another Black character, the Flash’s love-interest Iris West (Kiersey Clemons), was cut entirely, but may reappear in the so-called Snyder Cut next year. Cyborg was initially announced as a key Justice League superhero with his own spinoff franchise on the way, but Warner Bros. mothballed his solo movie following Justice League‘s lukewarm reception. Cast in 2014, this was Fisher’s breakout role.

In a Twitter thread posted on Tuesday, Fisher said that as far as he knew, his barber Wayne Nembhard “was the only Black man to ever grace the hair and makeup trailer” on this film. He also shared a Variety article about the lack of Black hair and makeup technicians in Hollywood—a problem that means many Black actors have to do their own hair and makeup, or rely on subpar work from inexperienced white stylists. In this case, Warner Bros. had the budget to bring in a personal barber for Fisher, but despite months of work plus reshoots, Nembhard’s name was left off the credits.

If you’ve ever waited for the post-credits scene on a film like Justice League, you’ll know those credits go on for a long time, including numerous seemingly minor behind-the-scenes roles. It does seem weird that one of the lead actor’s hairstylists wasn’t included.

At the same time, Justice League‘s IMDb page lists dozens of other uncredited hair and makeup workers. We don’t know how Warner Bros. decided which people to include on the credits. It could be the case that a core team of in-house makeup techs were credited, but outside contracters weren’t. However Fisher is still bringing attention to an important issue here, and it’s cool to see him stand up for a film industry contracter with less power than himself, making sure Wayne Nembhard gets his due credit in the Snyder Cut.