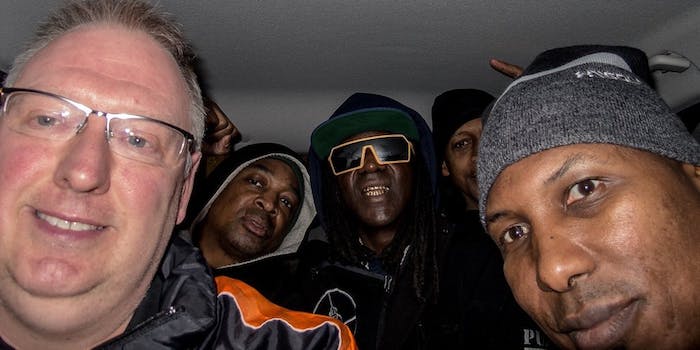 U.K. man drives Public Enemy to their next gig, gets an awesome selfie

This guy has a great story to tell his grandchildren.

The members of Public Enemy needed a lift to England’s Sheffield Arena after a signing at a local record store. A taxi failed to arrive. But Kevin Wells, Public Enemy’s most devoted fan, was available to chauffeur the rap legends in the back of his Ford Focus to a gig at the arena supporting The Prodigy.

Wells was the last person in line to get his CD signed at the record store when a member of the band’s entourage exclaimed, “Does anyone have a car? We’re running late.”

The 50-year-old photographer had a car. Public Enemy needed a ride. It was a match made in heaven, and Wells was delighted to help the rap group make their call time in 45 minutes.

“It was very, very surreal,” Wells told the Guardian. “We all walked to the car—Flavor Flav, Chuck D, and two of their entourage—and they all just piled in. I’m local to Sheffield so I know all the back streets to get there pretty sharpish so I didn’t feel too tense. I knew I could get them there in time.”

Wells was as committed to a short, safe journey as Public Enemy was committed to being delightful passengers. The hip-hop powerhouses would have received top passenger ratings as they filled Wells’s Ford Focus with laughter and jokes, enriching Wells’s driving experience.

Public Enemy even asked Wells how he was doing, breaking the solemn rule between driver and passenger.

“They were just asking me where I came from and whether I was local to Sheffield,” Wells told the Guardian. “They were saying how amazed they were in England, how close together all the cities are, because they are used to travelling in the [United] States. They said they love that—though weren’t so big on the weather in England.”

Although the entire experience was surreal, Wells said that the highlight of the ride was when “Bohemian Rhapsody came on, one of the entourage at the front shouted ‘Bo Rap! Waynes World!’, and they all started headbanging in the back of the car.”

Describing the outrageous scene, Wells said, “I kept looking in the rear view mirror and I could see Flava Flav with his sunglasses on and his big clock and I couldn’t believe it.”

The entire trip took about 15 minutes. While the band wanted to extend their one-night love affair, offering to include Wells on the guestlist, he was duty-bound to photograph the bands “Scouting for Girls” and “The Enemy” at their performances instead.

Despite Wells’s regular band photography gigs, he had never been around international musicians like Public Enemy. “They are my first famous passengers in my Ford Focus,” he said, “but it’s a good one to dine out on for a few years.”