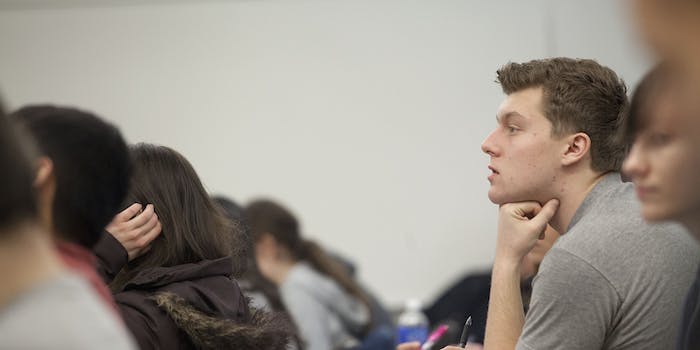 The Internet loves him, but pointing the finger solely at students won't fix the problem.

While this may sound like the tagline of a cheesy ‘80s movie, it’s also the message that Texas A&M University at Galveston professor Irwin Horwitz was trying to send recently, when he literally failed an entire class. In an email to his unruly group of students, which has since gone viral, Horwitz wrote:

Since teaching this course, I have caught and seen cheating, been told to “chill out,” “get out of my space,” “go back and teach,” [been] called a “fucking moron” to my face, [had] one student cheat by signing in for another, one student not showing up but claiming they did, listened to many hurtful and untrue rumors about myself and others, been caught between fights between students. … None of you, in my opinion, given the behavior in this class, deserve to pass, or graduate to become an Aggie, as you do not in any way embody the honor that the university holds graduates should have within their personal character.

Obviously, Horwitz’s case sounds extreme, and there are other factors at play here. The professor was under an additional amount of stress, having struggled to find a teaching position after moving to Galveston with his wife, before landing a non-tenure track slot at Texas A&M.

However, it’s also worth noting that Horwitz sent an email to the school’s administration letting him know he was walking away from the class, in which he predicted they’d take matters into their own hands, which they are. According to the university, one student from Horwitz’s class had already been cleared of cheating, and while they are investigating other students for the behavioral infractions Horwitz accused them of, the across-the-board Fs will not stand.

It’s hard to know what to think of Horwitz. His class sounds like it was an absolute nightmare, but the hint that he might’ve exaggerated these claims, and the fact that he was willing to fail students who he knew earned passing grades based on the conduct of their classmates, makes his actions more than questionable. Regardless, there’s one thing that Horwitz’ actions do reveal, and that’s that America’s current higher education system is seriously screwed up.

Most of the time when we hear about America’s collegiate woes, we’re hearing about the students. But as this latest incident out of Galveston has reminded us, there are just as many issues related to professors. Whether it’s the inflated power we give to tenured professors or the limited resources we provide to adjuncts, no one seems to know how we should treat our educators (and this isn’t even getting into the myriad of problems teachers face at the K-12 level).

Horwitz is hardly the first professor in recent years to take a stand, with several other notable examples of instructors walking out of the classroom when students failed to comply with their demands.

Professors’ relationships to schools’ administrations are always a heated topic, and the Galveston incident has helped to personify this. In a piece for Forbes on the top 10 reasons why being a college professor is so stressful, David Kroll highlights a particularly interesting example of this: “The default reaction from administration is that the professor is at fault. Professors are also penalized if their course grades have too high of a percentage of Ds and Fs.”

This brings us to the matter of grade inflation, another crucible where the world of higher education is concerned. Starting in 2003, Duke professor Stuart Rojstaczer began compiling statistics which reveal just how pervasive grade inflation at America’s colleges truly is. Between 1991 and 2007, the average GPA across America’s colleges rose from 2.93 to 3.11, and since 1940, the percentage of As given out by American professors has shot up from just 15 percent to nearly half of all grades given out.

While Princeton has particularly taken steps to fight grade inflation, these problems are endemic across American higher education. U.S. News & World Report’s Sita Slavov noted in 2013, “Some have argued that these inflated grades are necessary to help students get ahead in a competitive job market. While that might be true for an individual professor or university, at the national level grade inflation is a negative-sum game that imposes serious costs on society.”

The frayed intersection of students, faculty, and administration is on full display when it comes to grade inflation. Administrations don’t want to do anything about it, lest they risk losing funds and enrollment. At the same time, students become less adept at rising to the occasion in their various courses, which vexes professors. This, in turn, can cause professors to lash out at the students and the administration around them, as Horwitz did.

These problems are endemic across American higher education.

His solution was an overreaction to problems created by grade inflation, which even hurt the students that didn’t deserve it. Meanwhile, grade inflation goes on hurting everybody. The Huffington Post’s Angelina Massoia puts it simply: “Students will not apply themselves nearly as much when they know they are guaranteed a good grade.”

This is what really cuts to the core of the Horwitz case. Too many students scrape by taking an academic backseat in college, which leaves them feeling entitled but unprepared for the world outside. A 2012 book, Academically Adrift: Limited Learning on College Campus, by Richard Arum, reveals that most students report studying just over 12 hours per week, and that most of their courses didn’t require more than 40 pages of reading each week or more than 20 pages of writing in a semester.

Moreover, around 45 percent of students polled didn’t show any improvement in critical thinking skills, complex reasoning, or written communication within their first two years in school. And follow-up tests have indicated that students didn’t show much improvement in their junior or senior years in these areas either.

The biggest problem with Horwitz’s abominable class was that most of these students shouldn’t have been in college from the start. This is part of the reason why the fundamental worth of college has been a constant source of recent debate, with some arguing that higher education has become a complete waste of money, while others point to statistics indicating that college grads still earn more on average.

It’s hard to argue that in some instances, college is indeed a foolish way to spend money, yielding little reward for students’ time and effort, but pointing the blame solely at students won’t help fix the problem.

For Horwitz’s part, he was wrong to enact such a sweeping action in the face of his discontent. The more pertinent step for Galveston and other universities across America is to recognize that they may be making it too easy for classrooms like Horwitz’s to exist. By fostering an environment that lowers standards while raising tuition, colleges are sending a message that education is easy and not worth taking seriously.

College should be hard, but by giving his whole class Fs, Horwitz proved that it is university bureaucracies who are really slacking off.