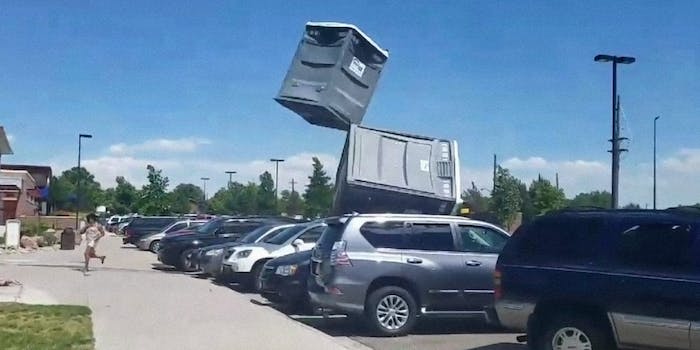 These porta-potties reached heights undreamed of by most portable toilets.

A recent windstorm in Commerce City, Colorado, sent park goers scrambling for safety, while two porta-potties decided to use the opportunity to soar to freedom. In the now viral video, the portable toilets can be seen flying through the air and reaching heights undreamed of by most public restrooms.

Although at least one of the porta-potties seems to make it pretty high, it’s not breaking any portable toilet flight records. For that, you need jet propulsion, as can be seen in this porta-potty rocket launch from a few years ago.

The short clip of the wind-swept porta-potties is all over Twitter, but seems to have come from a longer video posted to Facebook on June 10 by a woman named Gabriel Flores. The full video shows people scrambling to protect their kids and a man yelling “Don’t move!” as he records all the action. Luckily there were no reports of anyone being injured.

For what it’s worth, Flores also posted this video of a dragon flying around, but as far as we can tell, the porta-potties are real.

Naturally, people are already making remixes of the video.

There’s a Wizard of Oz version.

It’s better with the Wizard of Oz music 👠🦁🐯🐻🌪🏡🧙🏻‍♀️ pic.twitter.com/KlIFiCAzbM

It gets so much better with Breaking Free from High School Musical pic.twitter.com/HjOOZdkgbJ

And, of course, a Doctor Who version.

In the event of severe high winds, the Daily Dot recommends seeking shelter immediately in a basement or interior room and, if you have to poop, probably find someplace that’s anchored down.