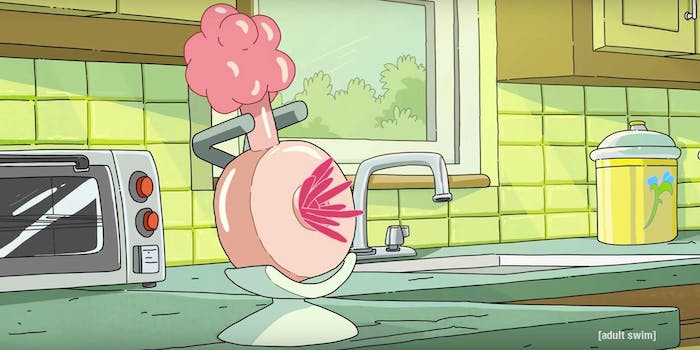 What the heck is a plumbus?

No household is complete without one.

Editor’s note: This article is occasionally updated for relevance. It was originally published in 2017.

A plumbus is a household device so common it doesn’t really need an introduction.

Just kidding! Nobody knows what a plumbus is, and that’s part of the joke. The Adult Swim cartoon Rick and Morty introduced the device in an episode titled “Interdimensional Cable 2: Tempting Fate” in September 2015.

If you’re unfamiliar with the show, it’s a very loose parody of Doc Brown and Marty from the Back to the Future trilogy. The mad scientist in this case is Rick Sanchez, a narcissistic and ill-tempered genius who travels space and time with his skittish teenage grandson, Morty. Morty’s sister Summer, his parents, and an ever-expanding roster of alien lifeforms round out the cast.

The origin of the plumbus

In “Interdimensional Cable 2: Tempting Fate” Rick, Morty, and Summer are sitting in an off-planet hospital waiting room flipping through channels on Interdimensional Cable TV. Each of the TV clips was largely improvised by show creators Justin Roiland and Dan Harmon with their small team of writers. They started with simple ideas, then took them to weird, baffling, and ultimately hilarious conclusions.

According to EW, Roiland was exercising on an elliptical machine one day when “he was suddenly struck by the idea of a How Do They Do It?-type segment for something totally inexplicable.”

The result, my friends, is the plumbus.

The off-putting, vaguely sexual device is even grosser when you hear how it’s made, even though all the components are made-up words like “dinglebop” and “fleeb.” Though the clip is just a minute long, the plumbus caught on with Rick and Morty’s cult fanbase.

In September 2016, some fans noticed an unidentified sea creature bore a striking resemblance to the plumbus. Others, meanwhile, have been gleefully cranking out their own plumbuses (plumbi?) at home using 3D printers (because nobody knows how to get ahold of any dinglebop). One New York City pizza place even created a plumbus-shaped pizza to celebrate a visit from the Rickmobile Adult Swim is driving around the country this summer.

The game development studio Owlchemy Labs also included a plumbus in a preview of its upcoming Rick and Morty VR simulation game.

The show’s creative team seems pretty enamored with the sick genius of their creation. DVD and Blu-ray copies of the show’s complete second season included a plumbus owner’s manual.

Welcome to the exciting world of Plumbus ownership! A Plumbus will aid many things in life, making life easier. With proper maintenance, handling, storage, and urging, Plumbus will provide you with a lifetime of better living and happiness.

Though the manual appears to be as frustratingly vague as possible, it does add some useful insight into the mysterious ways of the plumbus. Apparently, it can be used for cleaning toilets and cooking eggs, and it’s dishwasher safe! There’s also a guide to troubleshooting problems with your plumbus. While this is all interesting information, one important point is still a mystery: What the heck is it? We may never know.