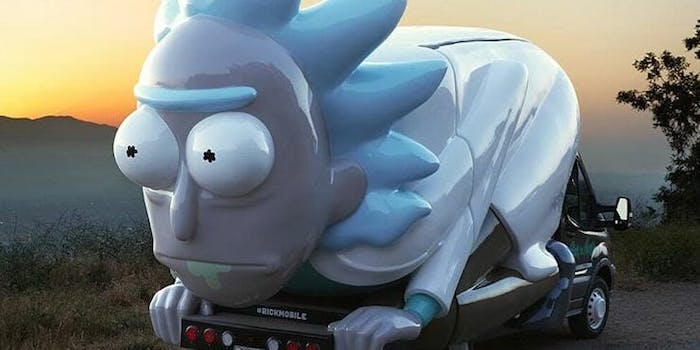 The Adult Swim folks are taking the phrase “let’s get this show on the road” to a new level—an inter-dimensional traveling, irreverent belching, Plumbus-waggling level. That’s right: Rick and Morty is going on tour this summer.

Things get rolling next Thursday, May 11, as a Rick Sanchez-shaped truck arrives in Atlanta, and the combo merch shop and promo opp will make a huge loop through the U.S., including the full run of San Diego Comic-Con in July, before landing at New York Comic Con, Oct. 5-8. This pretty much sums it up:

It’s a store that is mobile and also Rick shaped. It’s the #rickmobile: https://t.co/W48P5za0BO pic.twitter.com/PGSIC9M5p1

Road trips are dumb, but at the end of the day, everything we do is meaningless.

We don’t entirely know what this tour entails yet other than exclusive merchandise, but given that the first episode of season 3 hit the airwaves on April 1 and the rest was promised “later this summer,” it seems like it’s definitely something to keep a close eye on. Furthermore, while not all of the locations have been set in stone, many of the dates are slated at Alamo Drafthouses across the nation, which lends itself all too easily to a sneak preview of new episodes.

Analog maps are an antiquated form of navigation but the only sure fire way to prevent government bureaucrats from tracking you every time you take a dump.

Between the season 3 premiere, the nationwide hunt for Szechuan sauce, the new VR game Virtual Rick-ality, the games, the coloring books, and the Grand Theft Auto V mod, it might seem that excitement for this show’s return has already reached its fever pitch. But we suspect this tour will take it up to 11.

Here’s the complete list of Rickmobile tour dates, with apologies to residents of Montana, both Dakotas, Nebraska, Kansas, and the rest of the flyover states:

And that’s the waaaay the tour goes. Keep an eye on the Adult Swim website for specific venue information for each city.