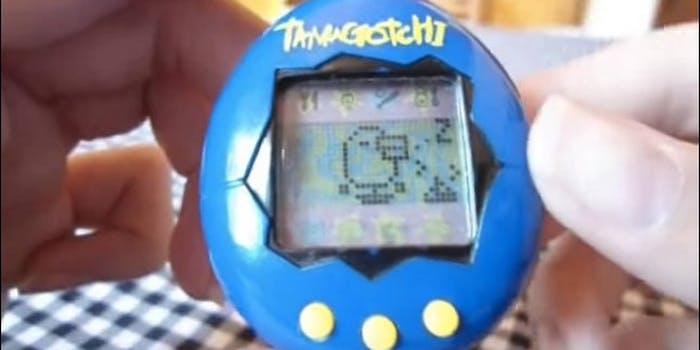 Pets are not accessories, Orlando Bloom!

Katy Perry‘s elfin consort Orlando Bloom arrived at the Met Gala with an unusual lapel pin: a Tamagotchi, the combination virtual pet and pedometer that delighted and then annoyed kids in the ’90s.

Tamagotchis don’t do much, but they require a surprising amount of maintenance. You have to feed them and, more importantly, clean up their poop before they get sick and die.

Orlando Bloom does not clean up after his Tamagotchi.

Would you look at that?

i am the Tamagotchi Orlando Bloom is wearing to the Met Ball that has shit itself pic.twitter.com/oOeDFlhno8

That is one unhappy Tamagotchi. On a night dedicated to the x-ing of “manus” and “machina,” it looked safe to say that Bloom is one manus who does not highly regard his machina. Instead, he preferred to attend a swanky celebrity ball with tiny pixelated poo-poo on his breast. A political fashion statement, or simple laziness? What was going on inside the mind of actor Orlando Bloom, located inside Bloom’s fine-featured skull, perched just above Bloom’s be-shitted Tamagotchi? We may never know.

Pets are not accessories, Orlando Bloom! A well-cared-for Tamagotchi can live a productive life and provide decades of joy. One man kept his treasured pet alive for 20 years. You can’t even take yours out in public without letting it fall asleep in its own dookie.

For shame, Orlando Bloom. For shame.